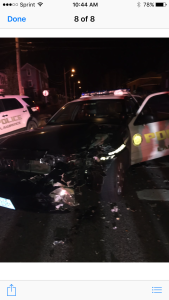 Two Lawrence Police officers were injured last night after a man rammed three police cars before crashing into a tree.

Witnesses say that Lawrence police officer Charlie Saindon, – assigned to the auto theft task force –  pulled the vehicle over near Philips and Exeter Streets after the license plate came back active-stolen as the vehicle that was carjacked the night before on Foster Street just blocks from where Officer Saindon pulled him over.

After pulling over, and seeing other police cars coming in his direction, the suspect – whom police were told may be armed – fled and began to zig-zag through oncoming traffic and police cruisers.

Officer Jay Cerullo – who heads the auto theft team – was coming in the opposite direction as the fleeing suspect sped at him and another cruiser driven by Detective Angel Lopez in front of him at a high rate of speed, estimated to be about 60MPH. 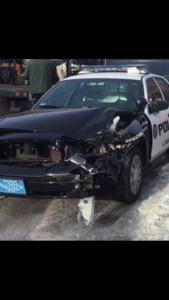 When the cruiser in front of him stopped short to avoid the suspect barreling at him head on, Cerullo’s cruiser crashed into it as the suspect weaved around them striking another cruiser driven by Officer Phil Henrick.

The suspect then proceeded to hit a tree where his car came to a complete stop.

Henrick, hurt from the crash, exited his cruiser and pulled the suspect out of the car, making the arrest with other fellow officers. He was charged with carjacking, assault and battery with a dangerous weapon and multiple other counts including receiving a stolen motor vehicle.

CAR THEFTS CUT IN HALF

When Sgt. Cerullo took over the task force in 2016 the numbers were reduced to 581 cars stolen.

At the current pace of car thefts in the city, officers estimate that about 325 cars will be stolen in Lawrence this year making it the lowest number of stolen cars in the history of the city.