By Tom Duggan on July 3, 2009Comments Off on Lawrence Community Works Raising Money for Lantigua 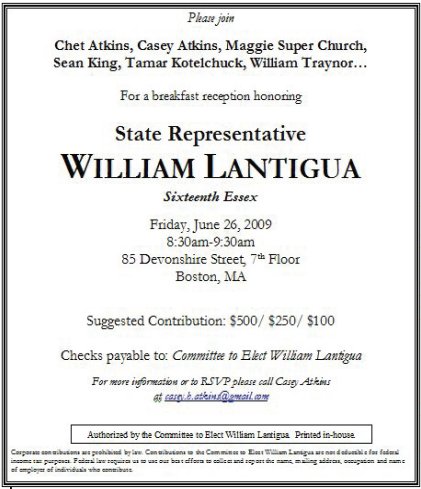 You have to hand it to the poverty pimps at Lawrence Community Works, they really know how to pull a fast one.

Last month LCW started their sham campaign called “Yes We Will” where they invited every candidate for office to attend an event so they could size up the competition for their pre-selected candidate for mayor, Willie Lantigua That’s right, Bill Traynor and his LCW cronies can pretend all they want that their motives are pure. They can pretend that all they care about is educating the “ignorant Latinos” in the city of Lawrence, (which seems pretty racist to me), but they aren’t fooling me.

Bill Traynor and several members of the LCW board of directors sent out a fundraising letter (see pic.) just days after the “Yes We Will” rally asking their friends and supporters to donate money to Willie Lantigua’s mayoral campaign. Here’s the best part, the invitation says “printed in house” at the bottom.

Either way, the board members of LCW can try to divorce their secret political activism and shenanigans from the supposedly “politically neutral” Lawrence Community Works (NON PROFIT) organization but, we all see what’s going on here. LCW board members are looking for more of your tax money and what better way to get it than to ingratiate themselves with every candidate for every office so that no matter who gets elected in November, every official has a warm and fuzzy feeling about the “objective” work they do. Well, i’m sorry to rain on their parade by exposing their personal efforts to get Lantigua elected but, this fund raising invitation raises lots of questions.

Where was it printed?

How much of the taxpayers money does Lantigua secure for them at the state house? Why are they supporting anyone at all when they are telling people they are neutral and my favorite question… are they taking all those volunteer cards and sign in sheets at all their vents and giving them to Lantigua for fund raising letters?

Are these letters going to LCW workers?

Ah… So many questions… STAY TUNED!