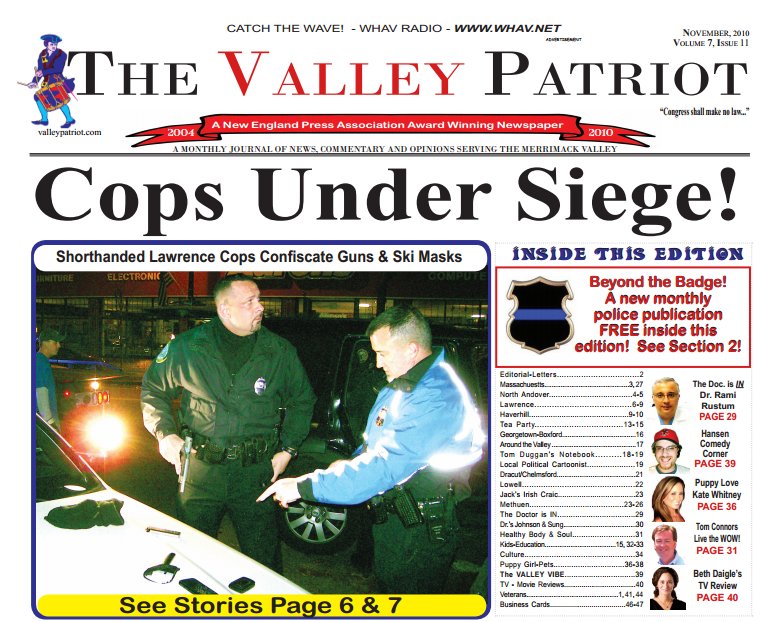 When the call went out one Tuesday night last month, alerting Lawrence Police officers of an impending crisis, the details were sketchy. A thirteen year old Arlington School girl never came home from school just a few blocks away and by 11PM the parents were panicking at the police station. All that was known was her age, height and weight and that she was last seen leaving school in her school uniform.

Police suspected she might be with her “boyfriend” but didn’t know for sure as they sent out the BOLO (Be on the lookout) to all cars and shared the missing girl’s stats with other surrounding community police departments.

The police radio was buzzing all night as Lawrence officers scurried in the late hours and early into Wednesday morning to find the missing teen who did not show up for school Wednesday morning. As time went on, police finally became convinced that she was most likely with a thirteen year old boy she was in love with, and whose parents also came forward to say their son was missing as well.

Methuen, Andover and North Andover police departments were on alert and as Wednesday wore on (the first 24 hours being most critical to finding a missing teen) love letters between the two were poured over by detectives in The Valley to try and get any clues as where the two might be.

“We had to go on the assumption that they may have been abducted or that something had happened to both of them. Even if they ran away a lot can happen to a couple of children that young,” one officer told the Valley Patriot. “We had to treat this as if the kids were in danger,” he concluded.

But the parents were incensed that police could not send out an Amber Alert because there was no evidence she was abducted or that she was in danger, something police said seriously hampered their efforts. “That’s the law,” a North Andover cop said. “Many parents think as soon as their kid goes missing that we can shoot out an amber alert and the whole system will kick in, but it doesn’t work that way.”

At one point early Wednesday, word that the girl had been found made its way to the Valley Patriot newsroom where we reported it online but within hours officers contacted the paper to inform us that she and her “boyfriend” were still at large.

By 3pm Wednesday, the 24 hour mark, police still had clues but very little to go on. Parents of both teens were driving the Arlington neighborhood and began to ask for help from family and friends to put up posters and aid in the search but by sundown there was no trace of the missing teens.

When the early night shift came back on duty early Wednesday night, Lawrence cops were devastated to learn that only SIX police officers would be patrolling the streets of Lawrence in SIX one-man cars with no state police backup on the streets.

“On a normal night, without the added problem of missing kids to find, six cops on the streets is a disaster waiting to happen for us and for the public,” one Lawrence officer said. “There are nearly 90,000 people in this
city and we’re expected to go out there and keep everyone safe? Including our own men? How long is it going to be before one of us gets killed or maimed? Now we have to go out, answer calls with no backup depending on how busy it gets and on top of it try to find these missing kids. Someone is going to get hurt. There is no doubt about it. It’s not a matter of ‘if’ another cop gets killed or hurt in Lawrence at this point it’s a matter of when. Our families are crossing their fingers every night that we’ll come home OK. How the hell are we supposed to look for two children when we can barely keep up with the calls that come in?”

None of the officers we spoke to wanted to be identified for fear of retaliation by the Lantigua administration.

At one point Wednesday night around 10:30pm, every available Lawrence police officer was tied up with NO backup to help them if they got in trouble and no way to respond to any member of the public who called for help.

Two of the short-handed Lawrence officers were dispatched to a taxicab robbery where the driver was hit in the head with a bat or blunt object at Demoulas parking lot on Essex Street. But, as police were responding to that call three more calls came in: a suicide attempt, three men stripping cars on Willoughbe Street, three men breaking into cars on the other end of Essex Street and there were still two missing teens to find.

As more calls came pouring in from the public, the battered Lawrence police struggled to maintain order in the city. They eventually caught an accomplice in the taxi robbery. The taxi driver actually chased down and caught one of the criminals who hit him in the head, while officers on foot pursued three men who were stealing cars on the other end of Essex Street.

This posed yet another problem more critical for the public safety of the city. With all those arrests going on at once, now all six of the Lawrence police officers on duty were at the station, booking prisoners and leaving Lawrence with ZERO officers on the streets to respond to emergencies.

As the police radio went silent, the eerie calm meant that cops at the station had to start answering calls from the booking room as every available officer had to run in and out of the station to answer cries for help throughout the crime torn city.

“This is (deleted) madness,” one officer said. “Do these politicians get what they have done here? Don’t they see?”

A Happy Ending.. For Now

As Lawrence police tried their best to keep up with what was going on in their city, Andover police were dispatched to Williams Street after a call from a concerned citizen who said that there was someone either “sleeping or in need of a medical attention” laying on the ground at the end of his street.

Within minutes, the Andover officers were on the scene reporting that the two missing thirteen year old kids from the Arlington School were either intoxicated or under the influence of some kind of drugs and were not responding appropriately to the officer’s questions.

An ambulance was called and the kids were rushed to Lawrence General Hospital for a medical check up as the parents were notified and a Lawrence police officer was rushed to the hospital to meet the family and the ambulance as it arrived.

Within the hour police turned the children over to their parent’s custody at the hospital and went back to chasing calls that had backed up nearly all night.

“Those kids could have been drugged out in our city, and if we got that call while everything was going haywire, that there was someone sleeping on the ground… there was no way we could have touched that call. There wasn’t one officer we could have gotten to that scene with what we were dealing with. They could have overdosed and died, or moved on to another location and we might have never found them,” a frustrated Lawrence cop
told us.

“But it’s all good,” he said in relief as the midnight shift started to come on duty, “by the end of the shift we somehow managed to get by without anyone getting killed, but how many more nights like this can we take? They cut 25 of our guys and they say they have no money for police protection but look at all the (expletive)
they are wasting money on in city hall.

Something is going to break, I can promise you that, either we get help or people are going to die and I am afraid there’s a very real possibility that it could be one of us. When is the madness going to stop? We all have to go back to work tomorrow night and the next night under these conditions and every one of our guys is afraid to speak out because we’ve already seen massive retaliation against officers who do.”

“The public needs to know Tommy, they need to know this is real, it’s not political bull-shit, it’s not some talking point to get votes. We need help and all the mayor can do is bash us in the press and cut our funding and put our lives more at risk. You have to tell the people what are dealing with, here…. Our families live in this city too!”

One Response to "Lawrence Cops Under Siege: Six Cops Working Alone at Night"