By Tom Duggan on May 16, 2014Comments Off on Lawrence High Alumni Gives More Than $74K in Scholarships; Mayor Rivera Tells Students “Don’t Be Afraid to Fail!”

Rivera revealed what he learned playing football, why he didn’t go to college after graduating high school, and why he took an “F” on a chemistry exam. Rivera said it came down to one thing, he failed because he “counted himself out” before he even tried.

“So here I am, this kid from Lawrence High. I was awful at football,” Rivera said.

“I was the smallest center in the Merrimack Valley … we went one (win) and eight (losses) that year in football. We got crushed every year.”

“One of the things that I always took with me, was that we always worked really hard to try and make something from what we had.  “

“My experience with teachers was out of this world. I had Doctor Murphy … she would root for me in her chemistry class every day. And I’m not that smart of a kid,” he said admitting he was a “C” student.

“On a good day I was a “B” student, but in chemistry I was definitely a “D” student at best, on my best day.”

“I did this a couple of times in my life, I counted myself out before I even got into the contest. There was a big test and I just said, ‘you know what, I’m going to skip class because I’m not ready for the test. I’m going to fail so, I’m not going to try. So, you know how it is right, you do something you’re not supposed to do, and exactly what you don’t want to happen, happens. I’m in the hallway and she finds me in the hallway. She asked ‘why weren’t you at the exam’, and I said ‘Well, I was going to fail.’

Rivera recalled how he had applied to five colleges when he graduated high school but  he really wanted to go to Fordham University. Rivera said that because he got accepted at four colleges but not Fordham University, he decided not to go to college at all.

“So, I made a real smart move and instead of going and spending a wonderful four years on a college campus enjoying the luxuries of college and fun, and partying, I went to basic training. I joined the United States Army and became a military police officer. I learned a lot, and I was honored to serve my country. But, we also got called to fight in a war. So, then I thought, I probably should have gone to college instead of going into the army.”

Rivera said that he was lucky to come back without getting hurt and went to the University of Massachusetts on the GI Bill.But when he started college he got called out of class because there were some costs the GI Bill did’t pay for. Rivera was told he had to come up with more money or he couldn’t stay. He says he went out looking for a job that day and got one working for the university.

“The lessons I learned at Lawrence High School stayed with me the whole time. Again, don’t count yourself out. Even though you are getting beat 1 (win) and 8 (losses) show up and put the shoulder pads on, and practice hard.”

“I’M NOT SUPPOSED TO BE STANDING WHERE I AM”

“If you fear failure, take it from me, copping out, not doing it, you end up doing worse if you try not to fail. Failing is part of this learning process.”

Rivera finished his remarks by asking all the graduating seniors to stand. As the audience applauded he said, “We are so proud of you. There are a lot of people outside of this building, they probably counted you out. You were not supposed to be doing what you are doing. But, listen I know how that feels. I’m not supposed to be where I’m standing. A lot of people thought I was going to lose. But, I still showed up every day and campaigned hard. And you guys showed up every day and went to class.” 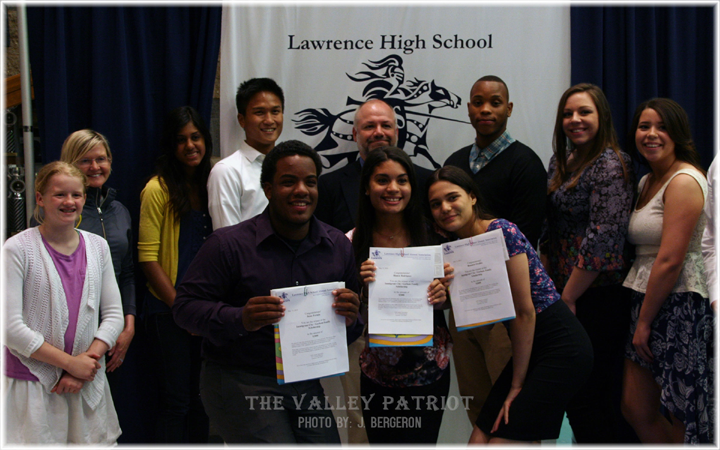 AMONG THE LHS ALUMNI DONORS

The family of former Lawrence Police Chief Thomas Nastasia including his 91 year old widow and two sons attended the event and gave a scholarship to a graduating senior.

Slain Army Sergeant Pierre Raymond, attended local schools and joined the Army in 1998. He spent 13 months in Bosnia as a military mechanic. He was discharged to the National Guard and after being called to serve in Operation Iraqi Freedom, was killed in action in 2005. Part of Osgood Street, near the stadium, has been renamed in his honor. 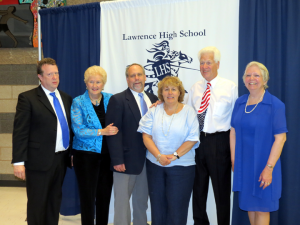 Physical Sciences Inc. a broad-based research and development firm headquartered in Andover, Massachusetts, not only donates a $2,000 scholarship each year, they have given summer jobs for each of the four years they have been donating scholarships.

The David Linehan scholarships are granted every year as the result of Linehan’s will. When Linehan died he left 50% of the sale of his house in North Andover to the Lawrence High School Alumni Association for a yearly scholarship.

The Mount Vernon Neighborhood Association $500 scholarship was given by past president Frank Incropera.

Key Polymer of Lawrence, which is not owned by a LHS graduate gives a $330 scholarship every year.

The National Honor Society and JROTC students volunteer and assist with serving food, setup and organizing the event every year.

The Valley Patriot gave two $400 scholarships from proceeds of their annual BASH.

The Lawrence High School Alumni Association is run by an all volunteer board.

Chris Eldredge, of the LHSAA said that any Lawrence High School graduate who does not receive an Alumni newsletter can email him with their name the year they graduated and their address he will be happy to send updates on the alumni association. You can email Eldredge at: chris@lhsaa.com

FULL VIDEO OF THE EVENT

Lawrence High Alumni Gives More Than $74K in Scholarships; Mayor Rivera Tells Students “Don’t Be Afraid to Fail!” added by Tom Duggan on May 16, 2014
View all posts by Tom Duggan →