By Tom Duggan on August 1, 2019Comments Off on Lawrence Hometown Hero Kevin Vanderhorst 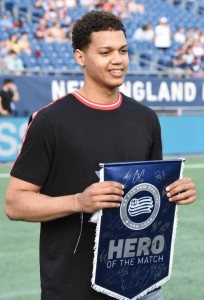 BOSTON — The New England Revolution honored Kevin Vanderhorst from Lawrence, MA as the Hero of the Match at the team’s home game on Wednesday, June 26th against Philadelphia Union.

Kevin was recognized during a pre-game ceremony for being a leader among his teammates and a role model within his community. He had a sideline view of the Revs pre-game warmups and enjoyed the game from the Putnam Club.

A recipient of The Valley Patriot BASH Scholarship in 2016, Kevin was diagnosed with testicular cancer right before the start of his junior season.

In defiance of his new limitations, Kevin only missed team activities when he had doctors’ appointments or when he was coaching and tutoring at his local YMCA. Kevin continues to be a leader amongst his teammates and is a role model in his community.

Kevin will return to competing athletically and to volunteering locally at the YMCA to help develop study habits and sports fundamentals for middle school students with more traction. Kevin is now 3 months cancer-free.

The Revs’ Hero of the Match program honors a local first responder, member of the armed forces or individual making a difference in the community at each home game during the 2019 season.

To nominate a Hero of the Match for an upcoming New England Revolution home game, please visit: www.revolutionsoccer.net/community/hero-of-the-match ◊