By Tom Duggan on September 12, 2017Comments Off on Lawrence Man Arrested After Running Over Trooper Last Week

Trooper Steve Gabriel believed the Camry’s driver to be JOSE G. JIMENEZ, 26, of Lawrence, who was known to him as the suspect who ran over another trooper’s foot while fleeing a motor vehicle stop in Brockton on Sept. 7. State Police yesterday obtained an arrest warrant for JIMENEZ for assault and battery on a police officer with a dangerous weapon. 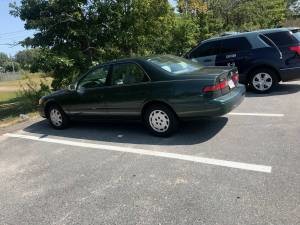 While keeping the Camry in sight this morning, Trooper Gabriel queried the Camry’s registration and determined it was owned by a different Lawrence man – the same person who is the registered owner of the different vehicle that JOSE JIMENEZ was driving when he ran over the trooper’s foot last week. Trooper Gabriel also reviewed a license photo of JOSE JIMENEZ and further confirmed that he was the driver of the Camry.

Trooper Gabriel, along with troopers from the Milton Barracks, attempted to stop JIMENEZ. He refused to stop, and troopers pursued him up to the Route 93 split in Randolph, and from there onto Route 95 northbound.

The suspect exited Route 95 at University Avenue in Westwood. The pursuit was terminated, but cruisers remained in the area searching for him. Troopers located the Camry abandoned near The Peterson School. Troopers set a perimeter and MSP K-9 Kojak began tracking the suspect. At that time, an employee from the Osprey Wireless business approached troopers and told them a man suddenly had entered into the building to ask if they were hiring. Troopers responded to the business and observed JIMENEZ sitting down filling out what appeared to be an application. Trooper Gabriel went up to him and said, “let’s go.” JIMENEZ replied, “let’s go,” and was taken into custody without further incident.

In addition to the warrant for the assault with the vehicle last week, JIMENEZ was charged with the following fresh offenses:
– Failure to Stop for Police;
– Operating a Motor Vehicle After Revocation;
– Operating to Endanger; and
– Speeding.

Troopers transported JIMENEZ to the Milton Barracks, where a bail clerk ordered him held on $250,000 cash. He is expected to be held overnight and will be brought to Quincy District Court tomorrow for arraignment. Photos of the Camry and of MSP K9 Kojak are attached below.