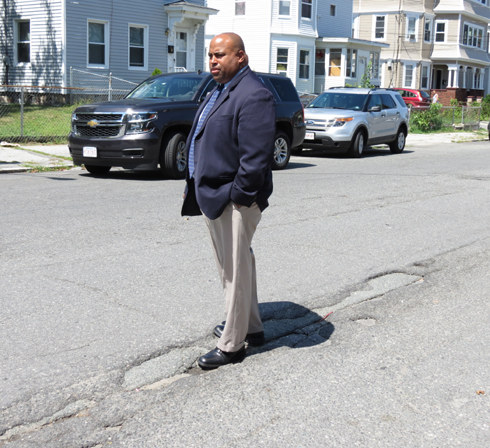 Valley Patriot sources at the state’s Department of Transportation say that the department has been working with the state’s Inspector General as part of a multi-agency criminal investigation against former Mayor William Lantigua over a paving scam Lantigua was involved in while he was running for reelection.

State officials told the Valley Patriot that the private paving company “Highway Rehab” out of New York came into the city and paved the roads but didn’t seal the roads with weather sealers, leaving the streets to fall apart less than a year later. Highway Rehab then submitted a bill to the city. That bill, Mayor Rivera says, will not be paid as they didn’t go through the proper procurement procedures.

Lantigua singed a waiver with the paving company to have them do more streets in a shorter period of time and plastered signs on each street saying that the streets were being paved due to the efforts of “Mayor Lantigua” even though the streets were paved with state transportation money secured by State Rep. Marcos Devers in the state legislature.

Standing on a huge pothole on Osgood Street, which was paved by Lantigua in October of last year, Mayor Rivera said that the Lantigua “Pavegate” scandal is costing the city an additional $600,000 to repave them the right way.

Flanked by State Representative Marcos Devers, Rivera used tough language challenging law enforcement and state agencies to “prosecute everyone involved.” He also said that he was frustrated that the investigation has taken so long and that he has been “kept in the dark” as to the status of the criminal investigations, saying more agencies need to be investigating.

“Let me tell you something, if I wasted $600,000 at a private company charges would be brought against me,” Rivera said. “There’s no reason why it should be any different for the city.”

“Today I’m calling on those investigating this matter, and those who should be investigating this matter to prioritize it and to bring closure to it. It’s very important that people be held responsible for this. Lawrence often times gets a bad reputation for not doing the right thing. But, it’s hard for us to bring law and order when, in matters of this import , it appears the authorities are not going after those responsible. “

Rivera hinted that he had heard that the FBI may be investigating but once again said his administration was left in the dark.

“The city will clean up this mess, and we will use state dollars to do it. But someone else will have to go after those who caused this very expensive mess. I’m not sure why they are dragging their feet. Over  $600,000 has been wasted, it appears that bidding laws have been broken and  circumvented. They should be all over this. At the very least they should tell us where they stand in the investigation because currently we are in the dark.”

“Where is the legal process, I ask? The longer they wait to hold someone responsible, the longer the public good is ignored that just means that justice is denied to the taxpayers, and [leads to] the sentiment that government waste is not only tolerated but will be ignored and will fester…”

Mayor Rivera said that investigators have approached different department heads and asked them to make statements about the Lantigua paving scandal, but said he has no idea who those investigators were or what agency they were from.

Asked if his office was investigating and if he was doing an internal investigation to find out what city workers may have been involved River said “We’ve done the investigation we know what happened now it’s a matter of people who should be [criminally] investigating.”

State Representative Marcos Devers (D-Lawrence) told the Valley Patriot that Lantigua “took this Chapter 90 money and used it to campaign by paving certain streets he needed at election time and then put up signs with his name on it. It was like free campaign money. That’s not right, not with our state tax dollars. This was a waste of state money.”

“Willie Lantigua used a third world political strategy to impress voters at a time close to the election date by trying to show that he was working for the people. But he wasn’t. It was all a show. He was not using the proper procurement procedures, he didn’t follow that laws. He assumed the money was his to use to help his campaign for reelection. But, he didn’t even have the company put the weather sealing on the streets, he signed a waiver so that it looked like more streets were being paved, he gave the impression that this was legitimate work being done. But he didn’t do it right, and the state taxpayers have to foot the bill.”

Mayor Rivera said that it didn’t just happen at election time but that Lantigua may have been doing this during his entire four years in office.

“In the last four years much was made about the total number of streets fixed with state aid and even with city reserve dollars. I must say that as a homeowner and public official at the time, I too was impressed with total quantity of street that were being repaired. What we have come to find out is that the old adage that quantity does not mean quality: in the case of the roads that were fixed in the last four years, is true as you see here.

“Many streets that were paved in the last four years were paved in a manner that has left many of those streets degrading in an accelerated manner. Some streets were paved and manhole covers and catch basins were not raised leaving permanent potholes. So, it will cost us over half a million dollars to fix those problems that [were] done over budget and only half completed.”

“We are also going to do over $180,000 worth of [repairs to] streets that were done last year because of water infrastructure projects that they [the Lantigua administration] knew was going to happen this year. But, they did the streets anyway. So, we are going to have to tear those up and fix them new.”

“So in all, over $600,000 will be wasted to permanently re-fix these streets. This means the residents of Lawrence will have fewer streets repaired this year. It means we will have wasted a years’ worth of progress on streets that really need the work.”

MUCH WORK TO BE DONE

“For us this is not a political process it’s a process of properly paved streets. The hot and paste process that was used widely before, will not be used in this years’ road work. All streets included in the chapter 90 repairs are scheduled to be completed with the weather sensitive sealing coating long before the cold weather hits.”

“We will also do much needed repairs to sidewalks downtown and around the common. Also, after today the work of putting down new traffic lines and markings will commence. We are doing this in large part with the chapter 90 dollars and the pothole dollars that the governor and the state legislature brought to the City of Lawrence.”

“Chapter 90 dollars are also used to do planning work, we are also using a small amount of that to plan for a large improvement in North Lawrence that we will be discussing at a later date.”