By Tom Duggan on July 26, 2017Comments Off on Lawrence Mayor Cracks Down on “Tent City” Homeless Encampment, Sets Up Police Command Under Bridge

Lawrence Mayor Dan Rivera’s new “Homeless Coordinator” Anil “Nilly” DaCosta has issued a new directive to manage the ongoing problem of dozens of homeless squatters living under the Casey Bridge. The encampment, known as “Tent City” has been a haven for drugs, prostitution, and other crimes in the past three years, something DaCosta says cannot be tolerated any longer.

The new directive says that any organization or individual who wants to donate food or items must register with the city and check in at the new Lawrence Police command center which was placed under the bridge at Tent City on Wednesday. Mayor Rivera says the police command center will be manned with an officer “24-7 until further notice.”

“We are doing this,” DeCosta said, “because the encampment has gotten more and more out of control as time goes on. There are lots of people going down there to bring things like food and clothing and furniture. As of today, anyone who wants to provide any kind of services down there will have to register with me and check in with the police when they get there.” 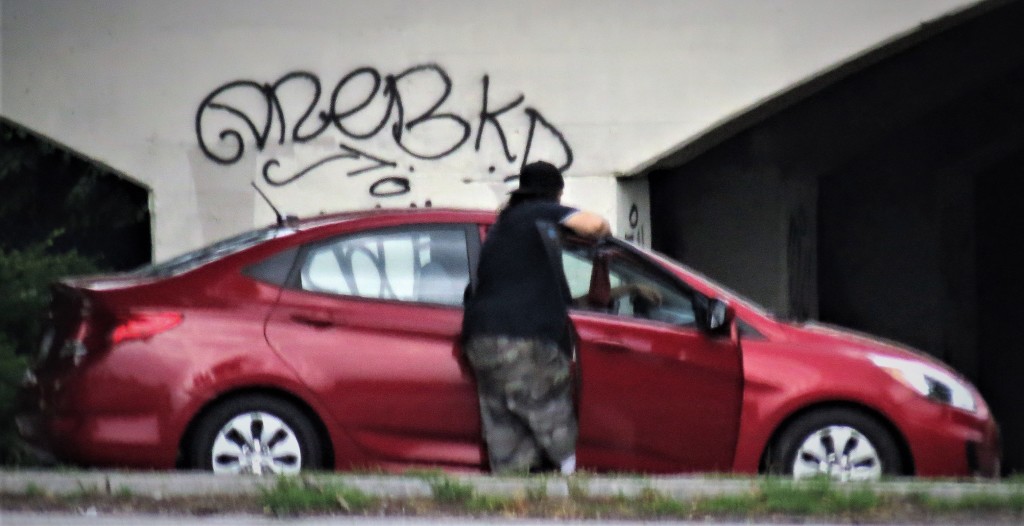 MAYOR SAYS GOAL IS TO DISCOURAGE ACTIVITY AT TENT CITY

Lawrence Mayor Dan Rivera says the people of Lawrence have had enough with the situation at Tent City and it’s his responsibility as mayor to do whatever he can to solve the problem.

“This is really something the state or the federal government is better equipped to deal with. We just don’t have the resources to manage this. So, we are doing the best we can. This is not a humane place for anyone to be. Nobody would want a member of their family under there, believe me. They need to come out and get the social services and treatment to start putting their lives together. The official policy is not to encourage people to be down there. Also ,if you are a criminal you can’t be down there. If there’s a warrant or you are a known criminal you are getting locked up.”

Rivera says that if people really want to help the homeless at Tent City, through an agency or a church, they can help get someone out from under the bridge.  “Help find them a place to be. Help them get to an AA meeting, bring them support by way of getting them a place to stay. Help them get health or mental health services.

The mayor says that the situation will be reevaluated to see what progress is being made.

YOU WILL BE TURNED AWAY

Asked what would happen if someone tries to feed the homeless or make a donation without his permission, Homeless Coordinator DeCosta said they will be turned away.

“They will be asked to leave by police. We have a command unit down there as we speak. You can only provide a service there if you are registered with me. No more people driving down there dropping off furniture or clothing. If people or organizations in the community can give real services like; case management, testing, psychological evals and so forth, real services, then fine. But, what we have found is that the homeless don’t feel the need to try and access the services they need, or go out to get clothing or other things; then they are being enabled and it does more damage than good.”

“I think Pemberton Park right there on the river, is one of the nicest parks in the area. But, people feel like they can’t go down there and enjoy it because of the activities that go on down there. That needs to change.”

DAYBREAK OFFERS TO PROVIDE SERVICES FOR PEOPLE AT TEN CITY

Carina Pappalardo, CEO of the Greater Lawrence Psychological Center – and the Daybreak homeless shelter – told The Valley Patriot that the new regulations for Tent City are something she is willing to help accommodate.

“Daybreak will help anyone and everyone who needs assistance, whether it’s food or resources. We already provide dinner, but we would be happy to start serving lunch on the deck at Daybreak. We can serve as a drop-off  spot for food or clothing, where donations can be made specifically for individuals under bridge who need assistance,” Pappalardo said.

On a daily basis, The Greater Lawrence Psychological Center in Lawrence provides medical assistance, paralegal assistance, housing and employment assistance, and help for women who have been in abusive relationships.

“I want to let people know that, given the situation down there, instead of bringing people lunch down at Tent city, they can drop off food at Daybreak shelter on 19 Winter Street, and we can provide lunch here for people who need a meal. “

The new Homeless regulations were spelled out in a letter DeCosta sent to the social services organizations which read as follows:

Protocols for Groups Providing Services for the Casey Bridge Encampment

These protocols have been proposed to better help those providing assistance to the transient population residing under the Casey Bridge. They are intended to provide guidance for groups and individuals offering support and services, while also ensuring that the homeless individuals are being truly supported and there is no unintended support of their addictive and/or other self-destructive tendencies. Though many groups and services have the best intentions, their execution can be easily manipulated to support drug addiction and deter individuals from seeking professional services. With these protocols, support and care can be coordinated with efficiency.  They will also help to uphold public health and public safety of service providers and the community as a whole. The protocols are in effect as of July 27, 2017.

All groups, organizations, services, and volunteers are asked to inform the Homelessness Initiatives Coordinator by email before going to the encampment. Details should include:

After the party is registered, they will receive dated tags from the Office of Community Development that are to be worn when going to the encampment. Without a tag, police can, at their discretion, ask unauthorized parties to leave. Any items or food that is brought without authorization will be considered illegal dumping and providers will be subject to penalties by the proper authorities. Any group or organization that has been approved by the Homeless Initiative Coordinator to provide goods or services to the homeless population must report to the law enforcement officer onsite prior to providing any service. Services can only be provided between 9:00am and 4:30pm, unless otherwise noted. Behavioral health and medical agencies will receive a document to present to police officials instead of tags due to the frequency in which they must visit the encampment.

These protocols should be followed with any other encampments.

If you have further questions, contact Anil “Nilly” DaCosta at the contact information below.  Thank you for your cooperation.