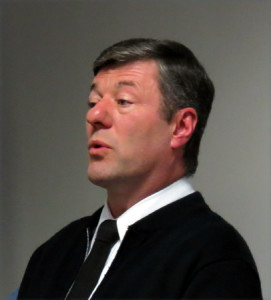 Deputy Fire Chief Moriarty’s knowledge of Lawrence’s streets, people and the firefighting challenges it faces; which he gathered through his long history providing mutual aid from Haverhill, and as a paramedic in Lawrence; will insure a smooth transition into the position. “What drew me to Brian was his combined knowledge of emergency response and his familiarity with the Lawrence community,” said Lawrence resident, business owner and Fire Chief Search Committee member Cesar Camargo-Sanchez. “His work as a paramedic has led to an established relationship with both the Fire Department and residents of Lawrence. He is an outstanding selection for our new Fire Chief.”

North Andover Fire Chief Andrew Melnikas worked with Moriarty while performing ambulatory duties, as well as on mutual aid fire scenes.  Melnikas offered, “Mr. Moriarty is the epitome of a team player. He is willing to listen to opposing views and discuss the merits of the same, realizing that, in the end, we are all working towards the same goal.”

William Moynihan, retired Chief of Probation at the Haverhill District Court and Chair of the Board of Trustees for Northern Essex Community College, offered a stellar recommendation on behalf of Moriarty: “He has immense dedication to his profession as a firefighter. He goes the extra mile to be the very best he can be in his beloved field of fire science, and goes above and beyond in his training as a paramedic, showing great compassion for the sick, injured and anyone in need of assistance.”

Deputy Fire Chief Brian Moriarty has received numerous awards throughout his career including Firefighter of the Year in 1995, Citation of Valor in 2003 and Paramedic of the Year in 2013. In addition to his professional experience, Deputy Fire Chief Brian Moriarty holds a Bachelor of Arts Degree in Fire and Emergency Management from Rivier College, an Executive Fire Officer Certificate in Fire Service Management from the National Fire Academy, an Associate’s Degree in Fire Science from the Community College of the Air Force, and a Paramedic License from Northeastern University.

Deputy Fire Chief Moriarty’s candidacy will be introduced to the Lawrence City Council for approval.

Mayor Rivera has also set up meetings with the City’s Neighborhood Association presidents, and with the business community this week so people in the community can meet and greet our candidate.