By Tom Duggan on February 19, 2022Comments Off on Lawrence Mayor DePena Tackles Long Neglected Conditions of the Buckley Garage

As a matter of precaution, the city of Lawrence inspected the conditions of the Buckley Garage at Amesbury Corner and Common St., to avoid the situation that was presented in Museum Square. The information that follows was taken from a report issued to the City of  Lawrence which collects the team’s observations to restore the John Buckley Parking Garage that is located at 99 Amesbury Street (on the corner of Amesbury and Common Street).

The primary work for the renovations to the Buckley Garage in Lawrence, MA will include the repairs and restoration to two existing four-story stairwells. Work includes, but is not limited to, the repairs to the stair treads and risers, painting the stairs and stairwell, and replacing the emergency lighting. Providing new signage, providing new replacement emergency lighting and exit signs, and more.

As a matter of precaution and while funding for the project is appropriated, the City of Lawrence inspected the conditions of the Buckley Garage in order to get ahead of the issues and avoid the situation that presented itself at Museum Square.

The information that followed was from observations of a prior administrations team, without any follow-up. Once the issues were brought to the attention of the Mayor Brian De Peña, by DPW Director Jorge Jaime, who discovered that the stairs were in such a poor state that needed to be replaced. Upon further examination, several other repairs were believed essential in order to keep garage in optimal conditions.

The main areas of deficiency on the interior of the garage are due to water damage, normal wear, and code requirements. Water penetration on the lower floors of the stairs in both towers has caused erosion to the metal structure and spalling of the concrete landings and treads. The fourth-floor elevator enclosure has water stains on the ceiling from a leak in the roof.

Accessibility entering and exiting the covered portion of the garage forces users to go back and forth between the sidewalk and asphalt roadway. Multiple blind spots for drivers and bus traffic along with the walking paths in their current state should be considered a pedestrian safety shortfall. Also, vehicular traffic entering the parking garage partially blocks pedestrian traffic due to the entrance gate location.

The existing garage has four major components from a traffic circulation point of view.

Pedestrian circulation within the garage is adequate. No attempt has been made to determine compliance with Americans with Disabilities Act (ADA) or Architectural Access Board (MB) standards. However, there appears to be adequate pedestrian circulation within the garage itself. The sidewalks along Common Street and Amesbury Street are inadequate for appropriate pedestrian circulation. Numerous obstructions make pedestrian pathways substandard in terms of width relative to ADA/AAB standards. In addition, mostly the path of travel is entirely technically sufficient, pedestrian level-of-service is inadequate owing to the numerous obstructions. On Common Street, there is a primary switchgear station that significantly obstructs pedestrian travel, as well as numerous poles, and trees. 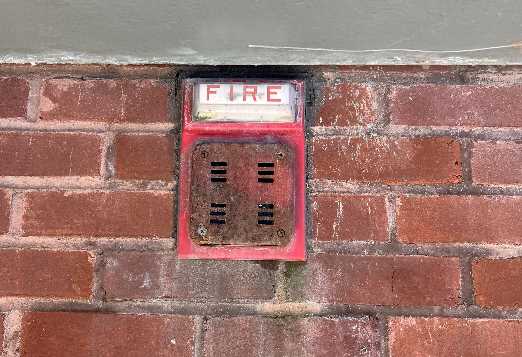 Existing electrical service appears to be sufficient for the existing loads in the building. Six car charges are located in the lower level. These devices are a recent addition to the building systems. No vehicles were being charged during the visit.

The other approach to revenue collection would be to use a radio frequency identification (RFID) system, either exclusively or just for permit parkers. For instance, permit parkers could be issued an RFID tag that activates the gates and allows for an expeditious exit from the facility.

Regardless of the method of revenue collection, the booths should be moved further into the garage to allow for adequate queueing without blocking the sidewalk or disrupting traffic in the travel lanes of the two adjacent streets. The recommendation is to allow sufficient queuing area for up to 3 vehicles in the garage. To provide queueing for three vehicles, the booths would need to be placed 60 feet from the back of the sidewalk at the entrances.

The bus circulation in the Buckley Transportation Center flows very efficiently. The arrivals and departures are a very well-choreographed event. However, egress from the terminal is challenged by traffic queues on Amesbury Street southbound at Common Street.

Mayor De Peña points to the stairs as the most immediate replacement to be done given their dilapidated state. Overall, these are easy fixes that will not cost lots of money in repairs and prevent major expenditures in the future.

The garage opened in 1993 and was named for former Mayor John Buckley, who was elected in 1951 and served for 22 years, making him Lawrence’s longest-serving mayor. The Buckley Garage has not had any major repairs since its opening. The upcoming repairs are part of an ongoing city’s capital improvement of the City of Lawrence’s infrastructure.