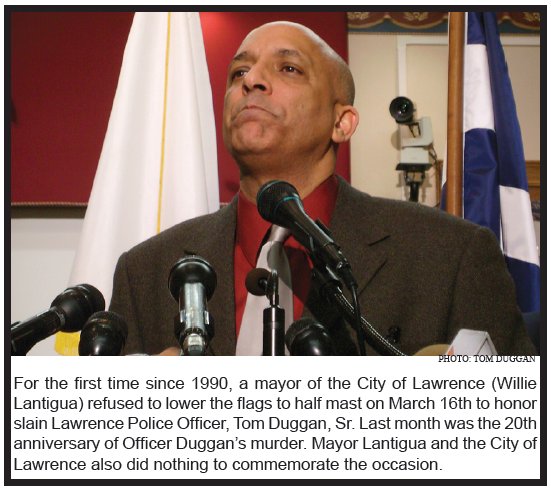 On Friday, November 17, 1978, Officer Christos Rouses was shot and killed while responding to a robbery in progress at Limby’s Drug Store on the corner of Branch and Smith Streets. Under a bright blue lit sky, I watched as thousands of uniformed police officers and plain clothes detectives marched through the City of Lowell and as I stood outside of Holy Trinity Church, I dreamed of one day being a member of this police department. On August 6, 1998, as a Lowell Police Officer I had the distinct pleasure of speaking at the White House – Rose Garden with President William Jefferson Clinton and at the end of my remarks I invoked the name of Lowell Police Officer Christos G. Rouses and reminded those present of the supreme sacrifice he and his family had endured nearly 20 years ago.

All four of these “HEROES” names are permanently and proudly displayed on the National Law Enforcement Officers Memorial in Washington, D.C., as well as the Massachusetts Law Enforcement Memorial at the State House in Boston, MA. However, most poignantly is the fact that the City of Lowell has also honored these “HEROES” with individual plaques, which are displayed on the Christos G. Rouses Memorial at the JFK Civic Center. Recently, the four portraits of these “HEROES” were permanently placed in Lowell City Hall as a lasting tribute to their legacy and sacrifice. Each of these “HEROES” have another side, another personal story of sacrifice, another part of them that never gets over the loss of losing a husband, a father, a son, a grandfather or an uncle – their family!

Retired Superintendent of Police John “Jack” Sheehan once told me that his biggest fear was losing an officer “under his watch” and although he was spared that horrific duty former Superintendent of Police Edward F. Davis, III was not as fortunate. Although it was not a line of duty death – we lost four members of our police department in a tragic plane crash on October 21, 1996. Although the police department and our lives would be forever changed as a result of this tragedy, the actions by the police administration, specifically Superintendent Davis, Deputy Lavallee, Deputy Cormier and Capt. Normandin and countless others, are deserving of praise. The Lowell City Council, the Mayor and the entire City Administration, particularly City Manager Richard Johnson, served with distinction during the “Darkest Day in the History of the Lowell Police Department.”

In the years that followed, there would be solemn reminders of their loss and tributes to those who lost their lives in the line-of-duty and those who died so tragically and so young. The tributes often invoke the memories of those who passed and what a profound effect their lives had on us all. Although these tributes and anniversaries bring back the loss and sacrifice, it also gives us opportunities to not only honor those who passed – but to thank their families and remind them that in the City of Lowell – “We do not forget!”

Unfortunately, this was NOT the case in the City of Lawrence last week on the Twentieth (20th) Anniversary of the brutal bludgeoning death of Lawrence Police Officer Thomas J. Duggan, Sr. The City did nothing to commemorate the tragic anniversary of an 18 year veteran police officer who gave his life in the performance of his duties. Officer Duggan’s family was not even given the respect and dignity of a citation by the City of Lawrence or the Commonwealth of Massachusetts. Perhaps, the Mayor / former State Representative were too busy looking for the 35 million in debt. But, one thing is certain – this is another example of disgraceful leadership in the City of Lawrence.

The next time someone says Lowell and Lawrence in the same breath – be sure to remind them that if Officer Thomas J. Duggan, Sr. was a Lowell Police Officer, his sacrifice would NOT have been forgotten and that his family’s loss would perhaps be a little bit more palatable if they knew his death was not just simply – a date on his tombstone!

The City of Lawrence should be ashamed of itself and its citizens should be outraged. To the Duggan Family, may the thoughts and prayers of all those who wear the badge be with you and shall eternal peace shine upon our brother, Thomas J. Duggan, Sr.