By Tom Duggan on July 31, 2018Comments Off on Lawrence Mayor Endorses Minicucci For State Rep. to Replace DiZoglio 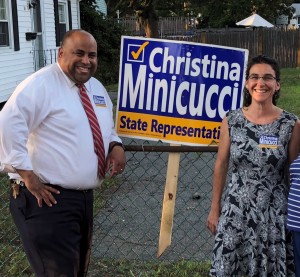 The seat is currently held but being vacated by State Rep. Diana DiZoglio (D-Methuen) who is running for State Senate this year. Minicucci is running against former Methuen City Councilor Lisa Ferry for the Democrat party nomination on September 4th.

“The challenges facing the Merrimack Valley are great, and Christina has consistently been a woman who tackles challenges head-on,” said Mayor Rivera.

“She is among the most diligent people I know. She asks the tough questions, knows the issues and matters in front of her inside and out, and always makes a considered decision.  She does not get along to go along. In big ways and small – whether  working with her Boy Scout troop or serving on the  School Building Committee – Christina strives to improve her community.  I want that type of drive and commitment working for us at the State House!”

Rivera noted that Minicucci formerly served on the YWCA Board of Directors, helped draft the North Andover Master Plan, coordinates volunteers to keep her school library open, and spent years as a sexual assault hotline volunteer.

“Christina lives the values that we want in our elected officials,” said Mayor Rivera. “She’s standing up for students, she’s standing up for women, she’s helping her community develop a clear direction and plan – and she does it all without fanfare.  She’s a work-horse, and we need more people like her in government.”

“Mayor Rivera has one of the most difficult jobs you can have,” said Minicucci. “He’s juggling so many competing issues, all with an eye towards lifting up his city and its residents.  I look forward to the opportunity to be a partner in making Lawrence, and the entire Merrimack Valley, better.”

Minicucci is seeking the Democratic nomination to fill the seat being vacated by State Representative Diana DiZoglio (D-Methuen), who is running for State Senate.

“My family immigrated to America and settled on Prospect Hill,” continued Minicucci, “the city is very much a part of my and my family’s story. This is why I have so much admiration and appreciation for the hard work Mayor Rivera is doing in Lawrence; and the opportunity to give back to the city that has meant so much to us all. I am grateful for his encouragement and support.”

The 14th Essex District includes precincts A1, A3, and F1 in Lawrence, as well as precincts in Haverhill, Methuen, and North Andover.  The Democratic Primary is scheduled for Tuesday, September 4th – the day after Labor Day.