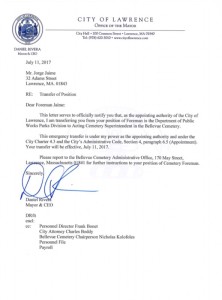 Just two months before the September mayoral primary in Lawrence, embattled mayor Dan Rivera has removed one of his campaign opponents from his city job of DPW foreman, and transferred him to the position of Acting Cemetery Superintendent.

Jorge Jaime, who is running for mayor against Rivera, says the move is political.

“I didn’t represent any inconvenience for him before, but now I’m in the race and doing my thing, and I’m working hard. So, I think he saw I am viable and people are coming to my campaign, and he’s trying to hide me over there at the cemetery.”

Jaime says that moving him from a protected union position to a non protected, non-union position might also be a way for they mayor to get rid of him later.

Rivera sent the letter to Jaime around 10am, Tuesday morning notifying him of the move. Jaime reported for work in his new job shortly thereafter. 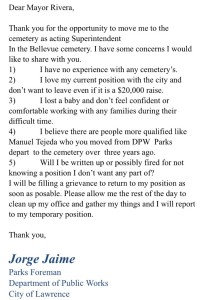 In response, however, Jaime wrote the mayor that he had no experience in being a Cemetery Superintendent, and that even though the position was a bump in pay of more than $20,000, he likes his job as DPW foreman, adding that he had recently lost a baby and does not feel comfortable working around giving families.

Lawrence Mayor Dan Rivera told The Valley Patriot the issue had to do with filling a needed slot at the cemetery at a time when there is a dire situation.

“It’s not political. I’m giving him a raise and a promotion,” the mayor said.

Jaime says it’s a promotion he doesn’t want, and makes him suspicious of the timing.

“The Bellevue Cemetery has faced many issues in the last few years,” Rivera said.

“We had to make emergency staffing moves to ensure the safe and orderly running of the cemetery. I have had to take emergency measures in support of the Board of Trustees to keep the cemetery working effectively. Monday, the Board filled one of the two open positions and I under an emergency situation had to fill another. Greg Morris was assigned to run the cemetery for a year and his time has expired. He has done a great job. Jorge Jaime who is a Foreman of Parks has been assigned to replace him. He was the next logical person. I am certain he will do a good job. After a year, if the Board has not found a permanent superintendent, we will rotate someone else into the position.”

Jaime says that despite not wanting the job, “I will do the best job I can for however long I am here. The foreman’s union filing a grievance and has offered to protect me as a union, so I will continue to pay dues even though I am being transferred to another position.”

“The rules of the union say that if there is a position available to fill, you have to go with the senior employee. So, that’s why they are gong to grieve it. They thinks it’s political. I think it’s political Why right now? Why now? I don’t understand. I’m running for mayor. I campaign after work, I don’t mix work and campaigning, and now he want’s me to be in a non union position where I’m not protected?”

Four years ago, Jorge Jaime lost a newborn. He says it was so difficult and sad. “I really don’t want to be around people, grieving for their child in the same situation I was in. I am in. I don’t feel comfortable right now dealing with that every day.”

Jaime said that he doesn’t expect the mayor to take that into consideration.