By Tom Duggan on December 2, 2014Comments Off on Lawrence Mayor Rivera Fires Election Coordinator Rafael Tejeda After Scathing Report, City Clerk Maloney May be Next

Lawrence Mayor Dan Rivera has fired Rafael Tejeda, (the Lawrence Bilingual Elections Coordinator) after a review of the Lawrence election process by election attorneys at Kopelman and Paige.

The municipal law firm released a scathing review of Lawrence’s handling of the election process after reviewing the 2014 elections.

Rivera said  he let Tejeda go “so we can go in a different direction” adding that Tejeda was an “at will employee”.

An attorney for Kopelman and Paige  was in Lawrence on election day and inspected the election locations, observing the election process and overseeing the ballot casting and counting process. The attorney also reviewed documents and training procedures prior to the election, criticizing Lawrence’s lack of organization and adequate education of election workers.

Rivera would have to submit City Clerk Maloney’s name to the Lawrence City Council with a recommendation that they uphold his firing. Rivera would need a 2/3 vote of the council to affirm Maloney’s firing.  Click document below for entire report 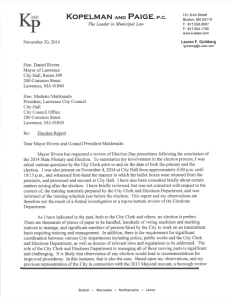 Lawrence Mayor Rivera has long criticized Maloney and Tejeda’s handling of the election department going back to Rivera’s early days as a city councilor.

The Kopelman and Paige review lists a myriad of election violations and procedures not being followed, painting a picture of an election department in chaos.

Under the Lawrence City Charter the city’s Election Department comes under the authority of the City Clerk. The Bilingual Elections Coordinator (Tejeda) works directly under Maloney.

Among other serious election violations, the report specifically cited Maloney and Tejeda’s role in:

As Bilingual Election Coordinator, Tejeda was an outspoken supporter of Lawrence Mayor William Lantigua and openly worked on Lantigua’s political campaigns while working in the Lawrence Election Department.

Tejeda is no stranger to election shenanigans, he was caught allowing fraudulent signatures in an election between Willie Lantigua ally, State Rep. Frank Moran, and newcomer Kevin Cuff.

Election officials at Secretary of State Bill Galvin’s office did nothing about the obvious fraud found on (now) State Rep. Frank Moran’s nomination papers in 2012. Galvin and Lantigua have long been allies since Lantigua’s days in the State Legislature.

Tejeda also admitted he forged signatures  on Mayor William Lantigua’s nomination papers in 2013,  then certifying his own forgeries as authentic. Tejeda was never prosecuted by Secretary of State Bill Galvin’s office, despite the fact that Tejeda had had a history of election misdeeds.

Tejeda was also involved in the scandal surrounding two recall petitions against Mayor Lantigua, where signatures of voters were deemed forgeries and not counted despite the fact that those voters appeared before the election commission attesting that the signatures were theirs.

According to the election review of Tejeda and Maloney;  “Covers were placed on [ballot] boxes, and seals were affixed, but access could still be gained to boxes without removing the covers,” and in one precinct ballots from broken machines were taken out of those machines and turned over to Lawrence Police officers for “safe keeping”.

The report was also critical of Lawrence City Clerk William Maloney for not being present when the ballots arrived at city hall on election night, not giving proper training to election workers, not following proper procedures in ballot counting, allowing untrained poll workers to assist voters, untrained poll workers and others having access to ballots, and improper handling of absentee and provisional ballots.

Mayor Dan Rivera promised on his first day in office back in January of 2014 that he was going to remove City Clerk Maloney.

During the 2013 mayoral election, then Lawrence City Councilor Dan Rivera enlisted the help of the Massachusetts Democratic Party to monitor the election to make sure Lantigua, (long known for manipulating elections) couldn’t cheat in his bid for reelection. Rivera defeated Lantigua by only 84 votes after a recount.