By Tom Duggan on May 3, 2017Comments Off on Lawrence Police Arrest Four on Firearm and Drug Charges 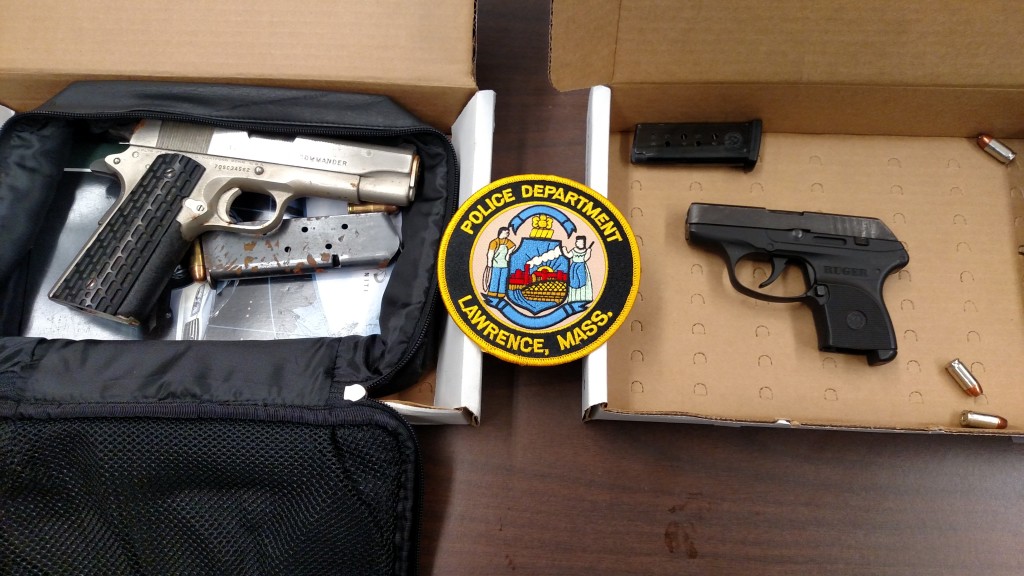 OSCAR MARCANO-VALVERDE, AGE 37, OF HAVERHILL is charged with:

• Possession of a Firearm Without a License

• Carrying a Firearm Without a License

• Possession of a Firearm Without a License

• Carrying a Firearm Without a License

Additionally, MENDEZ was charged with Possession of a Class B Substance (Cocaine).

On April 27, shortly after 10:30 p.m., members of the North Shore Gang Task Force and Lawrence Police Department were conducting surveillance in the area of Myrtle and Saratoga streets, when they observed a suspicious vehicle. A Lawrence Police detective conducted a traffic stop of the vehicle. During the stop, police located a handgun, magazine, and ammunition on the passenger seat, where MARCANO-VALVERDE was sitting. Police quickly determined that he did not have a firearms identification card or a license to carry. He was arrested at the scene without incident.

During a surveillance operation on April 28, at approximately 11:40 p.m., two Lawrence Police officers, working in plainclothes, observed a sedan occupied by three people pull out of the Merrimack Courts Housing Complex, on Essex Street with its headlights off.

As the undercover officers followed the vehicle, they watched as the driver, later identified as ACOSTA, turned into a parking lot without signaling, then turned around and began heading the opposite direction on Essex Street without ever turning on his headlights. The officers conducted a traffic stop.

Police were given consent to search the vehicle. As this was beginning, officers observed MENDEZ moving around in the backseat and they asked him to exit the vehicle. As he did so, MENDEZ dropped a folded dollar bill onto the ground that, when retrieved by an officer, appeared to have a white substance on it that appeared consistent with cocaine.

After MENDEZ was placed under arrest and transported, a search of the vehicle yielded a .380 ACP handgun. None of the three men in the car claimed possession of the firearm, so all three were arrested and charged.

A check of the gun’s serial number showed it was stolen out of New Hampshire.

Chief Fitzpatrick praised the work of the officers and detectives involved while promising that further aggressive enforcement actions would be ongoing, as police seek to root out illegal guns and gun violence in Lawrence.

“I want to congratulate all of the hard working officers involved in this operation,” Chief Fitzpatrick said. “We will continue to be aggressive in our pursuit of illegal firearms and those who carry them and use them to commit crimes in our community.”

All three men were held pending arraignment in Lawrence District Court. This operation was conducted with the support of the Massachusetts State Police.