By Tom Duggan on February 25, 2019Comments Off on Lawrence Police Partner with State and Feds to Arrest Violent Fugitive on Alder Street 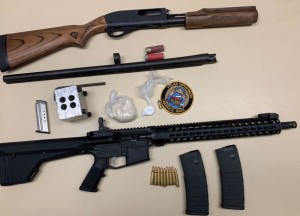 Lawrence police responded to a call of shots fired and a disturbance all at approximately 11:30 am on Sunday morning near the intersection of Hampshire and Alder Streets.

Sources say that the disturbance started as a domestic between two men fighting over the same woman when one man left, got a firearm and returned shooting.

Police arrived but before they could set up a perimeter the suspect fled out the back.

As part of the investigation a search warrant was obtained for the Alder Street residence.

Upon executing the search warrant police seized two firearms along with ammunition, heroin and fentanyl, as well as equipment consistent with a drug dealing operation.

Police also received information during the search and an arrest warrant was issued for Edward Rosado-Cardona  age 28 of Lawrence.

Rosado-Cardona will be arraigned Tuesday at Lawrence District Court on several firearms, and drug related charges, as well as several outstanding warrants.

Lawrence Police chief Roy Vasque says he is “grateful for the assistance of our State and Federal partners with bringing dangerous individuals such as this one to justice.”

Lawrence Police Partner with State and Feds to Arrest Violent Fugitive on Alder Street added by Tom Duggan on February 25, 2019
View all posts by Tom Duggan →