By Tom Duggan on August 25, 2017Comments Off on Lawrence Police Respond to Two Shootings in an Hour Friday 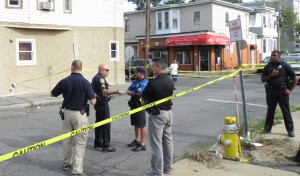 VIDEO OF REPORTER ARRIVING AT THE SCENE

While Lawrence Police were racing through the streets Friday afternoon trying to keep up with assaults, domestic calls, multiple overdoses, and traffic accidents, a black car with a man in the passengers seat with a woman driving, pulled up to a man on Park St. and shot him in the back. 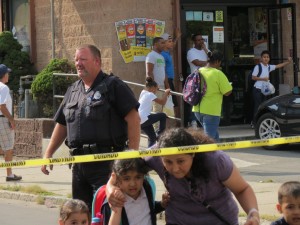 Children being dismissed from the Arlington School just one block away were flooding the area, some with parents in tow, ducking and running for cover as the man went down on the ground.

Officers blocked off the area, calling for traffic control to redirect the school buses and a line of cars containing parents leaving the Arlington School with their children.

Witnesses and officials told The Valley Patriot that the gunshot wound went into the victims back but was a through-and-through. Sources at the hospital say the man is in stable condition and will survive his injuries.

While detectives and uniformed officers were investigating the scene and talking to uncooperative witnesses, a second call for “shots fired” went out over the police radio.

“Shots fired, shots fired Brook Street” the dispatcher called , sending some police from the Park Street crime scene to the second shooting – leaving a smaller number of detectives and uniformed officers to secure and investigate the busy and crowded Park St. scene.

Callers had told police that a man with white sneakers and black socks, wearing a hat, shot at someone and ran into the park on Union Street.

Brook and Union Street is a congested area where many of the neighbors were sitting on their porch or leaning up against a fence watching the commotion but all claimed to have seen and heard nothing.

The Valley Patriot asked one man if we could interview him at the Brook Street shooting scene.

He replied, “You see where we live? You trying to get me killed?”

Police believe they know the identity of the shooter in both incidents and that it is the same person.

The Valley Patriot will continue to follow up on this story.