Lawrence’s Angus MacPherson, Two Wars and Forty Years of Naval Service! ~ VALLEY PATRIOT OF THE MONTH, HERO IN OUR MIDST

By ValleyPatriot on June 26, 2019Comments Off on Lawrence’s Angus MacPherson, Two Wars and Forty Years of Naval Service! ~ VALLEY PATRIOT OF THE MONTH, HERO IN OUR MIDST 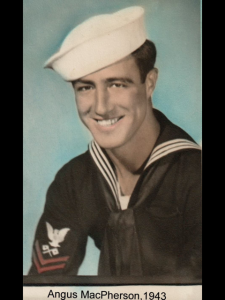 Lawrence’s Angus MacPherson, better known as Mac, was originally from South Boston with fond memories of growing up there and especially of hanging out with his four brothers and many close friends on the corner of E and 5th streets. Sensing that the war was coming to America, Mac, like three of his four brothers and his friends, enlisted in the military. Mac had three brothers that served; two in the Army and one in the Navy during World War II. Fortunately, all three of his brothers and his soon to be brother-in-law survived the war.

When Mac showed up at the Navy’s Enlistment Center, to the Recruiter’s and his dismay, he was under both the height and weight requirements. The recruiting officer rectified that by having Mac eat a lot of bananas and drink water, lots of water. Following that, the Recruiter asked him to step on the scale and told him to stand as tall as he could. His weight was now enough to enlist.

The Recruiter then unexpectedly stepped on Mac’s toes and when he jolted upward, he also met the height requirement and now was able to serve in the Navy. Mac joined the US Navy two days after his 18th birthday, on November 19, 1941. As fate would have it, this was just a couple of weeks before the Japanese attacked Pearl Harbor. Like many of his generation, Angus served in the Civilian Conservation Corp, (CCC’s) during the Great Depression.

Mac had originally enlisted in the Navy with intentions of becoming a Quartermaster. He began training to become a Quartermaster, one of the most mentally demanding of the enlisted ratings. On United States Naval and Coast Guard ships, the rating of Quartermaster is responsible for navigating the ship and maintaining navigation equipment, maps and charts. This is unlike the US Army Quartermasters who are responsible for transportation and logistics. On US Navy Submarines, an enlisted Electronic Technician navigates the sub.

So, after training as a Quartermaster, the US Navy, in dire need of Signalmen for the Amphibious Landings, directed Angus MacPherson to cross rate and become a Signalman. Mac could signal landing ships at ten words a minute with lights, and twenty words a minute with flags.

He spent eight years on active duty and thirty-two years in the Navy Reserves. He retired from the US Navy after forty years of service as Signalman First Class. Every man or woman who has served in the US Military will tell you that the needs of the Unit, the Branch of Service and our Nation “always” come before your personal needs (or desires). His job was to communicate with our ships by signaling sighting of enemy ships or submarines from the shore. He served our nation as a Signalman during two wars, World War II and Korea.

Angus spent most of World War II supporting amphibious landings in the South Pacific. Even now, he vividly remembers supporting the US Army’s 32nd Infantry Division (the Red Arrows) in their assaults on New Guinea, Luzon, and the Southern Philippines. The 32nd logged a total of 654 days of combat during World War II, more than any other United States Army division.

This group of men fought the Japanese early in the war and mopped up “holdouts” months after Japan surrendered. The unit was deactivated in 1946, following occupation duty in Japan.

Mac also fondly remembers Hollywood stars who flew to the battle zones in the South Pacific as part of the USO to boost the morale of the men and women. He easily recited their names; Bob Hope, Carol Landers, Marilyn Maxwell, Jack Benny, Tony Romano, Jerry Colonna, and ZaSu Pitts. Marilyn made such an impression on Mac that he named his second daughter after her!

Mac was an eyewitness to General of the Army Douglas MacArthur’s landing at Leyte Gulf. MacArthur allegedly ordered the US Navy coxswain to lower the ramp on the landing craft fifty yards off the beach, so an AP photo could be taken of him wading ashore. Once ashore, he declared to the citizens of the Philippines, “I have returned!” CBS radio correspondent William J. Dunn recalled to later historians, that he heard a junior Naval Officer on the beach, who was serving as a “Beach master”, tell the coxswain to drop the ramp so the General and his staff could wade ashore to where the men and women who had done the fighting were already waiting.

.Mac, at age 19, met his wife, Marge, who was not quite 16 years old, in Savannah, Georgia. She was working as a civilian for the 8th Air Force as a parachute rigger when they met on November 15, 1942. At 95 years old, that date is still etched in Mac’s memory. He was in Naval Training in Georgia when they met. Unfortunately, he was deployed a couple of weeks later and asked this woman that he barely knew but had fallen in love with, to wait for him. To his surprise, she said, “yes!”

During his time overseas, they wrote letters to each other and due to secrecy demanded by the government, Marge had no idea where he was fighting or if he was receiving her letters on a regular basis. Mac was fighting the war in faraway lands just longing for the day that he would be able to return home and marry his beloved Marge. Finally, the day came and Mac returned home to South Boston on January 5th, 1946. He brought beautiful bouquets of red roses; one for his mother and one for his bride-to-be. He had previously made arrangements for Marge to travel from Savannah, Georgia to Boston to stay with his mother until he made his way home. He sent money to Marge to make sure that his southern fiancé had plenty of warm clothes, most importantly a fur coat, to cope with the frigid temperatures which she had never experienced.

To their dismay, when Mac arrived home and he and Marge met with the Catholic priest to plan their long-awaited wedding, they were told that they would not be able to marry during Lent. After waiting three years to marry the girl of his dreams, Mac didn’t want to wait a minute longer. He asked the priest what it would take to rectify the situation and was told that $25.00 and dispensation from the Pope might make it happen. Mac immediately took the $25.00 from his pocket to get the process started. Shortly afterward, the Pope granted permission for Mac and Marge and all other returning servicemen to marry immediately.

The couple married 73 years ago, on March 24, 1946. Their family includes three daughters, one son, nine grandchildren, seventeen great-grandchildren, and one great-great-grandchild. Mac now drives to Nevins Nursing home every day to sit with his beloved Marge for four hours or more.

Mac was recalled to active duty with the Navy and served aboard the USS Sparrow during the Korean War. The active duty part of his service to the country came to an end in June, 1954. Mac and Marge’s active military years had sent them to Newport, RI, Charleston, SC and Staten Island, NY. The couple and their 4 children were finally able to settle in So. Lawrence, MA.

Like many others, Mac worked in a factory, Mead Packaging, where he mixed ink into huge vats of paper pulp. Following that, he worked for the state of MA as a firefighter at Harold Parker State Forest. He spent a lot of time in the fire towers there, on lookout duty for fires. He also had to help fight forest fires and brushfires. You may have seen him during one of the times he donned the Smokey the Bear costume at a parade or at a class about fire safety in the woods. He retired from Harold Parker in 1989.

A highlight of Mac’s life was when he was a guest on Honor Flight #34 to Washington, DC on September 20, 2014, accompanied by his daughter, Marilyn. He and his fellow WWII and Korean War veterans were saluted and honored for their service over and over throughout that memorable day.

Honor Flight makes sure that every possible WWII veteran gets to see the magnificent memorial that is dedicated to them.

The highlight of that day was when Mac got to thank and shake the hand of Senator Bob Dole, the man who was instrumental in getting the memorial built. He and his wife Elizabeth stayed at the entrance to the WWII Memorial on a very hot September afternoon thanking each veteran for his or her service. I think what made this interview more special than the others, is the way Angus illustrated how men and women of the US Army, US Navy, US Marine Corp, US Coast Guard, and US Army Air Corp depended on each other to win, and more importantly, survive. And how civilians working long hours in factories and farms, on the Homefront, such as his future wife packing parachutes, were just as important as infantryman to our Victory in World War II. America and our Allies beat the Axis powers on the battlefield and the United States beat them on the assembly line.

By the way, if you are ever in South Boston, go to the corner of E and 5th streets. There, you’ll find a plaque dedicating that corner to William F. Sloan, Mac’s best friend, who was killed during the Battle of the Bulge. Mac saw to it that even if he didn’t come home, Sloan would always be remembered and honored.

This article was written with the help of Marilyn Abate, Angus’s daughter and with much help from Angus MacPherson himself.

John Cuddy served in the US Navy’s Construction Battalions (also known as the Seabees) after retiring from the Navy; he earned a BA in History and an MA in Economics from the University of Massachusetts on the Lowell Campus. He has been employed in Logistics at FedEx for the last 22 years. If you know a World War II Veteran who would like their story told, please email him at John.Cuddy@Yahoo.com. ◊

Lawrence’s Angus MacPherson, Two Wars and Forty Years of Naval Service! ~ VALLEY PATRIOT OF THE MONTH, HERO IN OUR MIDST added by ValleyPatriot on June 26, 2019
View all posts by ValleyPatriot →