By Tom Duggan on May 29, 2013Comments Off on Lawrence’s Crayone on Forefront of Great Music, Raising Money for Charity 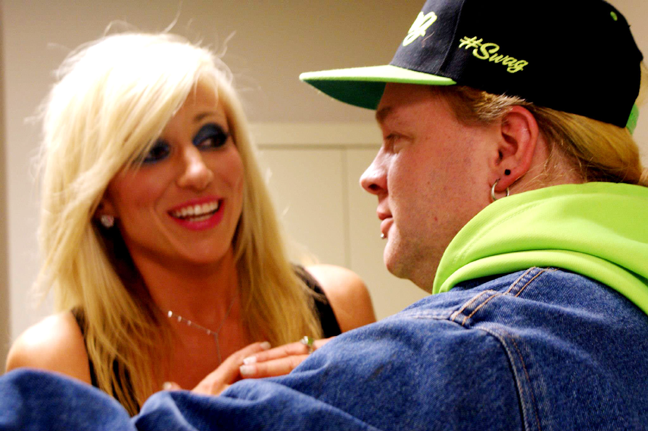 LAWRENCE – Funusual Records is proud to release the Charity album ‘We Stand With You’ featuring 17 tracks.

An album that features both local artists from around Massachusetts and artists of the ‘80s for a cause.

With the tragedy that hit Boston recently, Funusual Records has decided to help those in need and print this special ‘Physical’ CD version of the album with a $20 price tag.

The album has unreleased music from local artists, some of whom are brand new while others are up and coming artists like PaaPaa and Dynamic, to well established artists from Lawrence like Bylli Crayone & Domenic Marte. Leo A Dion (formerly known as SonChild) is also on the album. ‘80s legends Nu Shooz and Musical Youth have also joined the charity album.

Charity work is nothing new to label owner Bylli Crayone who is also a well known artist in the field of dance and club music. He has been involved with many charities for for years, in fact, back in 2007 he started a few of his own.

The ‘Back 2 School’, ‘The Gifts 4 Kids’ and the ‘Winter Coat Drive’ are just a few charities that he runs every year. Back in 2010 when Crayone formed the music group LawTown Voice with 20 artists from Lawrence they recorded the song ‘Trust And Believe’ where the proceeds went to Haitian Relief. He produced a Christmas album that featured many artists that have come together for charity. An album that included names like Domenic Marte and ‘80s pop princess, Debbie Gibson.

When asking Crayone how long it took to get this new charity album started, Crayone says “its ‘off the ground’. I came up with the idea for this project on Thursday night (the 18th), that night I sent out emails and made a ton of phone calls to artists that I know to see if they would get involved.

Everyone said yes, and I mean everyone. But I needed to get this project completed and for sale “asap”. There was no time available to wait for songs to be cleared, licensed, etc. Many more well known ‘80s artists wanted to be involved, but it could have taken 30 days or longer for the songs to be cleared and I had to turn them down and say sorry, this needed to be put together in hours, not days or a month. They understood and still support this project. Eighties artists like Martika, Tiffany and Tommy Page are just some of the ones I had to turn down.”

Back in the ‘80s, the group Musical Youth had a big hit with their song ‘Pass The Dutchie’ and now 30 years later the group is making a comeback. Their new single ‘I Can’t Wait’ can be found on the charity album. They also have a new album of their own coming out this month as well.

Then there’s ‘80s pop duo Nu Shooz, best known for their ‘80s hit ‘I Can’t Wait’, the song with the addictive bassline and wacky music video. They are on the charity album with a very ‘80s inspired pop song called ‘Anytime’.

Then for those of you who were freestyle fans, you must remember April and her songs ‘Someone To Hold’ and ‘Right on Time’. Shes had more than a handful of Freestyle hits, but those were 2 of her biggest. Well, she is on the charity album with a new song called ‘Hold On’ featuring Tito Puente, Jr.

When it comes to local artists, there are many involved with this album and to me, it all starts at home with a project like this. Local hip-hop artists include Son B of Hood Pro with his song ‘Miracle,’ a very emotional song with a message.

Then there’s Jill Marc with a soft rock song called ‘All My Tears’, she’s got a strong voice, reminds me of Melissa Ethridge. Leo A Dion formerly known as SonChild with his rendition of the Tina Turner classic ‘Whats Love Got To Do With It’. Other local stars that went beyond Lawrence, like Domenic Marte with a unreleased dance mix to his song ‘La Quiero’ and Bylli Crayone with a new remix of his 1991 song ‘Girl Hang It Up!’, remixed just for this album.

Other local artists include Justina, Reality, Da Chief, PaaPaa, Dynamic, Liza Zayas, Nazarae and Silly Grinn. And there’s two out of state artists that joined the project as well: Manny Blue of Florida with his song ‘Energy,’ and Lovari of New York City with his song ‘Right Here’.

The Album is available in CD format only and is being sold for $20 with free shipping. All the proceeds are going to THE ONE FUND to assist the 170+ people that have been injured during the attacks. Massachusetts Governor Deval Patrick and Boston Mayor Tom Menino have announced the formation of The One Fund Boston, Inc. to help the people most affected by the tragic events that occurred in Boston on April 15, 2013. If you would like to donate directly, you can at www.OneFundBoston.org

This album is also a tribute to those lives lost on April 15th. This album is a token of their memory. The cover art design features well known Boston related images and it also embraces the images of Martin Richard-8, Krystle Campbell-29, Lu Lingzi-23 and the inside insert has MIT Officer Sean Collier-26.

The entire project only took 3 days to put together. If you would like to purchase a copy of the CD, Please visit www.BostonCharityAlbum.com

Lawrence’s Crayone on Forefront of Great Music, Raising Money for Charity added by Tom Duggan on May 29, 2013
View all posts by Tom Duggan →