By Tom Duggan on June 23, 2014Comments Off on Letter: Amesbury Police Officer Thanks Valley Patriot, Publisher 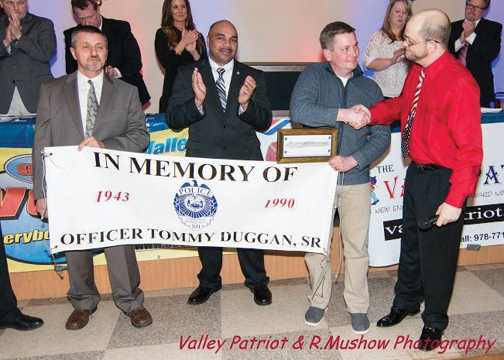 I wanted to send a note of gratitude for receiving the Officer Thomas Duggan, Sr. Law Enforcement Hero Award. (VIDEO) It is an honor to be recognized by your paper and organization, but more so to be placed at such high regard as to consider me an embodiment of what Officer Duggan, Sr. stood for in his life.

For the past 10 years I have been involved with raising funds and awareness of Law Enforcement Line of Duty Deaths, these funds go to support the families through Concerns of Police Survivors, ensuring that the sacrifices of those lost are not forgotten, and also go to supporting efforts to reduce the amount of line of duty deaths that occur.

Each year my efforts evolve, becoming a labor of love and growth for me. I not only ride to honor the life of Officer Duggan, Sr., but also to honor the lives of the 21,743 officers who have made the ultimate sacrifice. Those sacrifices began on January 3, 1791 with the loss of Constable Darius Quinby of the Albany County NY Constables Office, to that of Officer Stephen Arkell of the Brentwood, NH Police Department, End of Watch, May 12, 2014. 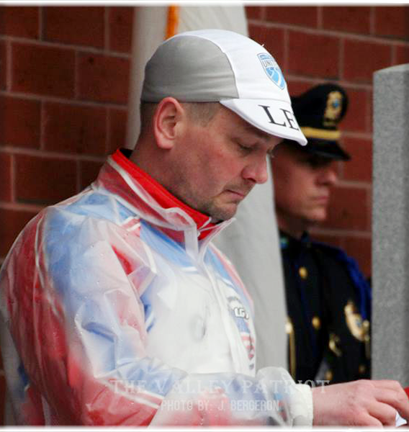 I also want to thank Tom Duggan, Jr. and The Valley Patriot family for supporting our efforts on April 30 to May, 12, 2014 when Law Enforcement United Bicycling Charity Team cycled from Berwick, Maine to Washington, DC on the 1,000 Miles of Honor. Tom participated in the ride by escorting the riders from Haverhill, MA to North Andover, MA, while proudly displaying the banner honoring his father’s sacrifice, End of Watch, 3/19/1990. Also leading the escort were two of the sons of Officer Joseph Lawlor of the North Andover Police Department, End of Watch. 3/27/1981. Two of Officers Lawlor’s sons have become police officers, one serving in North Andover and the other in Lawrence.

Please allow me to inform the readers of The Valley Patriot of future efforts that I have planned for supporting families of Fallen Officers.

On Sunday June 31, 2014, I will be hosting the 4th Annual Metric Century Bicycle Ride for Team New England. This ride is either 65 Miles or 35 Miles, beginning and ending in Amesbury, MA. A $25 dollar donation is all that is required to ride, by making this donation you will be riding in honor fallen officers and raising funds for Concerns of Police Survivors New England. This ride also will be raising funds for a new endeavor that I am planning which will be called: LEO Tour New England. The LEO Tour New England will be riders who are all either active or retired Police Officers and Survivors riding a multi-day tour through all 6 New England States, holding ceremonies at LE Agencies who have lost officers and also visiting memorials to the fallen officers of New England. The goal is to raise funds for COPS New England and to raise awareness of active Line Enforcement Officers to reduce the Annual Line of Duty Deaths to below 100 (it has been 65 years since that was the total officer killed statistic).