By ValleyPatriot on January 27, 2014Comments Off on Letter from Tomaselli Sisters on The $80 Million Lie in Salisbury 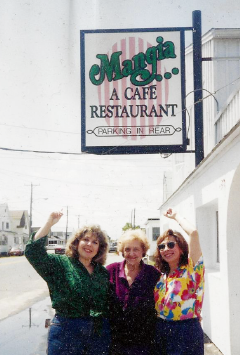 Letter to Tom Duggan, Publisher of the Valley Patriot,

We thank you for your quest to report the truth to your readers. You have devoted an enormous amount of time researching and reviewing government and court documents relating to the Town of Salisbury and their corruption scheme.

After people read the August 2013 edition of the Valley Patriot, many people wondered who in the world are the “Valley Patriot Sleuth Sisters” in Salisbury. We are proud to say that it is us. Your informative and compelling September 2013 column “An $80 Million Lie: Sisters Discover Sewer Project 100% Paid for with Grant Money” and your subsequent columns expose the corruption and cover-up in Salisbury.

Although what happened started many years ago, it is ongoing.

This is a basis of what transpired. We had a dream to open our restaurant. In March 1991 we bought restaurant property in Salisbury. The Town delayed us from opening for 18 months resulting in loss of business income for two summer seasons, due to the town’s extensive and many unnecessary permitting demands. On September 12, 1992 Mangia…a Café-Restaurant opened; it was beautiful, full of warmth, delicious food and lots of love. We received rave reviews.

On December 30, 1994, without notice, the Town revoked all our business licenses because they claimed we “violated the bylaw” because of taxes due. Contrary to what the town has stated, the truth is the town unlawfully revoked all our restaurant licenses. The Town violated their own bylaw, as we complied with the by-law as we paid 11 payments amounting to $4,775 in real estate taxes in the prior 12 month period and did not refuse or neglect to pay taxes in 1994. The Town halted all our earned income overnight, destroyed our livelihood and restaurant business investment. They impoverished us.

It has been 19 years this month that we were forced to close our wonderful restaurant. We pled with the Board of Selectmen and Town Manager in January 1995 to please allow us to continue to operate our restaurant. They refused.

The amounts they claimed we owed didn’t seem accurate. We started asking questions and checked to see where our tax payments were applied. We discovered that our tax payments were misapplied, our sewer user bills were calculated improperly with thousands of dollars in errors and were charged a sewer for the marsh lot and there was no lien at the Registry of Deeds when we bought our property. It was years later that we discovered our $18 million sewer project was paid 100% by Federal and State grant funds!!! We asked the Town to correct our tax bills, they wouldn’t and we had to go to court.

Here we are 19 years later, this is what is going on: the Town won in all the courts and in Land Court because they continued with the $80 Million Lie and gave the Court the wrong relevant dates.

Even though Land Court Judge Gordon Piper knew there was no lien, which is a mandatory requirement to collect for an assessment, knew there was no project cost to recover, and knew there was no basis for the $7.8, the Town still won and with NO PAPERWORK to support their claims. Judge Piper actually wrote that he had “…plausible doubt on the propriety of those assessments for betterments” and admitted he had competing views of the chronology that unfolded…and could not rule if the Town had a valid betterment lien.

So instead of allowing us a rehearing that we requested so we could clear the issues, he decided to deny our requests and ordered us to pay by September 30, 2013, $250,000 which was mostly the incorrect bills, interest while the case was in Land Court for years and although it took the Judge almost 3 years to make a decision, and for the Town’s legal fees.

These are the same attorneys who gave the wrong information to the Courts! It makes one wonder??? We ask how can a Town win with no documents to support their claims? The Town has since admitted that they have no records for $80 Million, never received $72 Million from Federal and State grants, yet they continue with the $7.8M story now to the Bankruptcy Court Judge.

Years after the EPA/DEP grant funded project had been completed in 1989, the figure of $7.8 Million suddenly materialized in 1992, yet had no basis in reality and was never related to any sewer project of any kind. In 1989 the Sewer Commissioners hired the law firm Kopelman and Paige as their financial advisors, they allowed the $7.8 million and told the Federal Judge that the sewer project was $80 Million rather than the truth which is $18 Million!

Because of our case, new owners, will now be liable for assessment even though when there is a title search, and there is no lien at the Registry of Deeds, they will no longer have the protection given to them by law. Municipalities can collect for costs, when no local share cost exists.

The only option to save our home and property was to file for Bankruptcy. Gracemarie filed on September 30, 2013.

Other people in Salisbury lost businesses and property for costs that never existed.