By ValleyPatriot on August 22, 2014Comments Off on LEX LUTHOR’S BOOK REVIEWS – Collective Retribution by D.S. Edwards 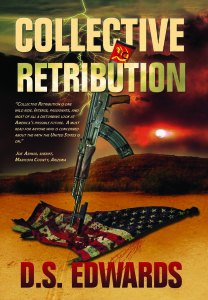 Collective Retribution, a new novel by D.S. Edwards, available on amazon.com and at CollectiveRetribution.com, is a fictional story of a future America that many people fear could happen if we don’t change the political tide.

On the dust jacket of the book is a quote from Abraham Lincoln, which says “America will never be destroyed from the outside, if we falter and lose our freedom, it will be because we destroyed ourselves.”

D.S. Edwards is a storyteller in the same class as Tom Clancy, Dale Brown or Stephen Coontz, but doesn’t bombard the reader with a lot of technical jargon. He builds a relationship between the reader and his characters, especially the main character, Levi Nirschell, and uses that to take the reader on a wild ride with many twists, turns and bumps. It was a page-turning adventure full of action that I just couldn’t put down. Levi Nirschell is a mixture of Davy Crocket and Jack Ryan, a real salt of the earth individual who has been called by his country many times to protect and defend it. He is a true patriot. He lives in a world where the President believes that all of America’s problems are caused by our arrogance, and if we only would apologize, the people in the Middle East would love us. Now, he finds out that a major terrorist attack is about to happen on US soil with nuclear weapons, and he is sent out to find and stop the plot.

This is a story that shares elements of current day America, like the illegal immigrant crisis and our deep political divide; the movie, Red Dawn; and elements of the American Revolution. What will happen to America when all of the basic necessities of life that we take for granted are not there? What happens to our society and way of life as the safeguards provided by our police and military aren’t available? Will people work together, or will what is the United States cease to exist? Will the 1/3 fight for liberty? It may be fiction, but scarily, could very well become our reality. When America is in trouble, will anyone come to help?