Lights in Lowell a lot Dimmer

By ValleyPatriot on April 1, 2014Comments Off on Lights in Lowell a lot Dimmer 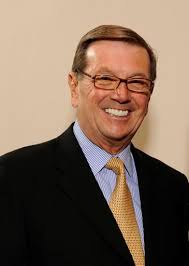 The City of Lowell is a darker place today. This week we said goodbye to one of its brightest stars, Tom McKay. Tom McKay was one of the most recognizable, active and socially responsible citizens in this city’s history. I could write a whole lot of words outlining all of Tom’s professional accolades as a businessman, entrepreneur, and philanthropist over the past 50 years, but I want to tell you about the man.

If you did not know Tom, I honestly feel bad for you. Tom was one of the most electric personalities you could ever meet. When Tom McKay walked in to a room, you knew it. He lit it up. I am not sure whether it was his big Irish smile, his always dapper appearance or that unmistakable voice?

I am not sure it was any of those things. Tom just had “presence”. And when you had the great fortune of being in Tom’s presence, you knew you were about to be entertained.

Tom had an uncanny ability to make everyone around him feel welcomed. As one of my family’s closest and oldest friends, I had the luxury of being around Tom my entire life and I can say with conviction; it was always an ‘event’.

“How ah ya, buddy?” was one of Tom’s signature greetings when he reached to shake your hand.

Many have joked that Tom called everyone ‘buddy’ because he could not remember your name. The irony is Tom McKay was everybody’s buddy. He really was. Tom lured followers and friends like the Pied Piper.

Perhaps the greatest story teller I have ever known, Tom’s charisma was captivating and you did not want to miss one minute of his wit and banter. Tom had a story (some may have been exaggerated) for every occasion and every audience. All of them were priceless. If stories can be considered gifts, then Tom was Santa Claus.

A devout Catholic, Tom was always one to give his time, energy and resources to those in need. When it came to charity and giving, Tom never said the word ‘no’. Both personally and professionally, Tom gave to any worthy cause that crossed his path.

While Tom led a very busy professional life, he was a family man to the core and they were always his first priority. His devotion and affection for his wife Lori and daughters Jennifer and Meredith were unwavering and always obvious. Tom was blessed with two beautiful granddaughters and in his last days, another blessing came in to Tom’s world, his first grandson, James THOMAS. Oh the stories you will hear, Little “T”.

Yes, the city of Lowell and beyond is a darker place, but the Kingdom of Heaven is surely brighter with Tom in it.

Rest easy, Buddy, we all loved ya.