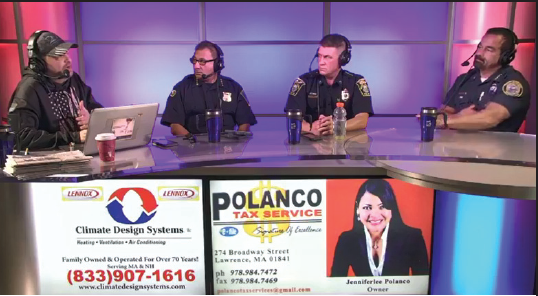 In the wake of recent violence, rioting, looting, and attacks on police officers all over the country, Valley Patriot publisher Tom Duggan invited three local police chiefs in to his podcast to discuss recent events.

Duggan asked the chiefs about officers shooting people in the back, shooting unarmed suspects, police training, and the anti-police movement spreading across the country.

Lawrence Police Chief Roy Vasque said that he can only suspend an officer for five days, anything beyond that is a decision of the mayor. “But, the process goes beyond the mayor, it goes to civil service, the unions are very powerful, and before you know it that suspension or termination is reduced to something else, and now we are back to square one with this individual. Then we have to baby sit them again.”

Each chief condemned the actions of the police officers in Minneapolis who are accused of murdering George Floyd.

“It puts us in a bad light, Chief Vasque said. “I can tell you we would all love to remove bad police officers because we don’t want to be painted with that same brush. But we are in a situation where we are dealing with the laws and legislation as they have been written. We have to follow a process.”
All three chiefs said they have never fired an officer for racism.

One of the issues raised by anti-police activists is officer training. Duggan asked the chiefs about the charges that cops don’t get enough training and that this leads to excessive use of force.

North Andover Police Chief Charles Gray said that the training his officers and other officers in the Merrimack Valley receive is “top notch”.

“Three or four years ago we all started training together with active shooter drills,” he said pointing to the other chiefs. “We have in-service training at the Methuen Academy where Lawrence, Methuen and North Andover – along with officers from other departments – get into a classroom and train together. We’ve done procedural justice. We’ve done two blocks of that. We’ve done training for the mentally ill and de-escalation training. All of this training is given out in the classroom setting, not just going online, but having a dialogue with each other. By having that in-classroom training, our officers are getting such unbelievable training – above and beyond what is required. I was talking to some legislators over the last few days and showed them all of the training that we did in the last five years. So, with this new legislation they are pushing, when they are talking about de-escalation training – that was last year. When they talk about us training for the mental illness, we did that two years ago. Procedural justice and other kinds of training we’ve already done that. We already have these policies in place it’s already been done.”

USE OF FORCE – WHEN A GOOD SHOOT LOOKS BAD

Methuen Police Chief Joe Solomon said that sometimes a good shooting just looks bad to the public who does not understand police management or procedures. “We always say about use of force, that sometimes it’s lawful but it’s awful. I know that sounds corny, but it’s true. Whenever you see a video of use of force – whether it’s an arm bar, or a taser take down – it looks sometimes like the officer is using excessive force. But when you break the segments down you find out that it isn’t. And that’s why we carry body cameras, because now we can go back and look. It’s not the word of the officer or the suspect it’s all right there. Sometimes, you can interview eight people who witnessed an event and you will get eight different stories. So, we look at the video and analyze the video for exactly what happened. Was it actually a remote control in the guy’s hand? Or was it a weapon? What did the officer believe he saw? All those things are important.”

Chief Joe Solomon said that more training means fewer complaints for use of force. Solomon also told that to the Methuen City Council last week during budget discussions. He revealed to them that Methuen’s police officers have not received the state mandated training for the last two years and cutting the training budget would cause problems with the state. Despite his pleas to the council, they cut money from the police budget for officer training.

“We truly believe in the sanctity of every life. We train that way. I think if you look at what’s come out of our city you do not see excessive force complaints for the most part. And if we do get one, we investigate immediately.” Solomon said that he believes better training saves lives in various different ways.

“Five or six years ago, we had an issue with a significant number of calls for an individual who was on the spectrum disorder. So, (after that) myself and Officer Aello received some training. We then formulated a training session for the whole police department on how to deal with individuals on the spectrum disorder. We were even invited to the national school safety conference where we were presented for that. Those are the things that we do extra here in the northeast. Where we see a problem, we try and understand the problem and then we address it.”

Duggan asked the chiefs about police officers shooting unarmed suspects and shooting suspects in the back.

All three chiefs said that there are situations where police officers can shoot unarmed suspects as well as shooting someone in the back.

“The standard we use is the reasonable person standard. It’s Grant versus Connor. It comes down to – what would a reasonable officer do in the same situation. The procedure we use is called the force continuum. Basically, you go from having a conversation and being interactive, to passive resistance, active resistance, volatile, and then deadly force. It’s a dynamic thing and that’s what people don’t understand. A situation can be very volatile and then all of a sudden, the person gives up. People need to realize that we do extensive training on use of force, whether it is firearms training, bi-annually, or pursuit policies. Finally, it’s a situation where your policies and procedures are in place. We have to abide by the standards set forth by the Mass Accreditation Council, if you train on these policies and procedures those high-risk, low-frequency events won’t end in a tragedy. By training you are giving officers more tools to be able to handle these situations.

Chief Vasque agreed saying that a shooting cannot be determined a bad shoot just because someone was shot in the back or was unarmed.

People ask about warning shots, but think about that for a minute. When you shoot up, where do you think that bullet is going to land? That bullet is coming down at some point. Every case is different. So, Chief Gray’s point, you can’t just ask; ‘can you shoot someone in the back yes or no?’ We can’t answer that because every single case is different. Remember we need all the facts and the evidence, so that we can make a decision on a shoot like that. And remember, the officer is making that decision in a split second in the moment.”

Methuen Chief Solomon said that one of the problems police departments have is that bad cops who are fired from one department can get hired by another department. “That’s why I like POST Certification. I think we should license police officers. For 34 years I’ve been asking why aren’t we licensing police officers? You could be a cop in New Hampshire, commit a violation and if they revoke your license you are done. You can’t be a cop anywhere else. You are de-certified. I know they are calling for that in the current bill at The State House.”

WOULD YOU DEFY AN ORDER TO STAND DOWN?

Duggan pointed out that police officers across the country were given a stand-down order during the riots, meaning that officers were told not to intervene while innocent people were dragged from cars. Duggan asked the chiefs would they defy orders to stand down while people are getting hurt, all three chiefs said they would not obey such an order.

“I agree 100% with Chief Vasque,” North Andover’s Chief Gray said. “We are sworn to uphold the law. If someone is getting beat up, not only am I going to have my officers intervene, I will intervene myself if I have to because that’s what we have to do.”

“No, I would not comply with an order like that,” Chief Solomon agreed. “But, of course we would have to deal with the ramifications. We have a law in Massachusetts that says we as police chiefs and the fire chiefs have total autonomy over our personnel, equipment, and manpower. So, a mayor can give me the order, but I’m not required to follow that order. Now, I might lose my job because the police chiefs work for the mayor. I say we should do what we have to do and then deal with the ramifications later on. I would not comply with an order that said we had to stand down while innocent individuals are being hurt.”

To listen to the entire interview, you can download The Paying Attention! Podcast on iHeartRadio, iTunes, Spreaker, and Podbean. To watch the streaming video, you can visit the Paying Attention Podcast page on YouTube or visit the photo/video gallery of Tom Duggan’s Facebook page.◊

One Response to "Local Chiefs Address Police Shootings, Training, Use of Force"