By Tom Duggan on April 20, 2016Comments Off on Local Heroes Honored with The Officer Tom Duggan, Sr., Public Safety Awards 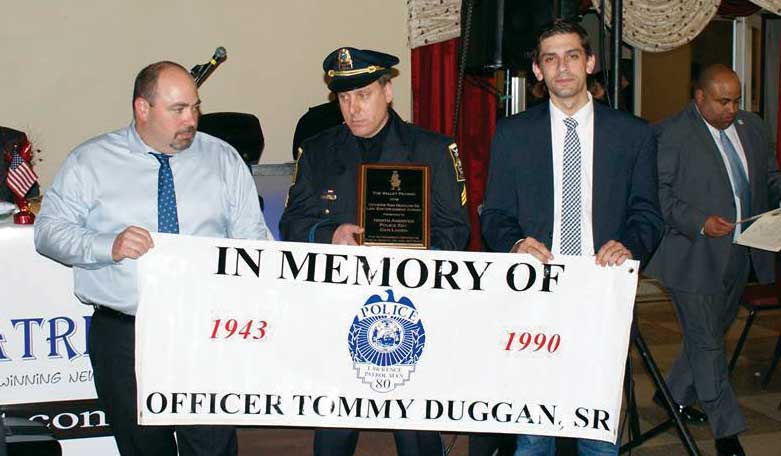 The award is given to members of public safety (police or fire) and/or a civilian who honors the service and personal sacrifice police officers and firefighters make every day.

Valley Patriot publisher Tom Duggan is the son of Officer Duggan and personally picks the recipients of this award each year. Officer Duggan’s granddaughter, whom he never got to meet, greeted the attendees and read the purpose of the award, then introducing the Fire Chief from Lawrence to grant the first award. 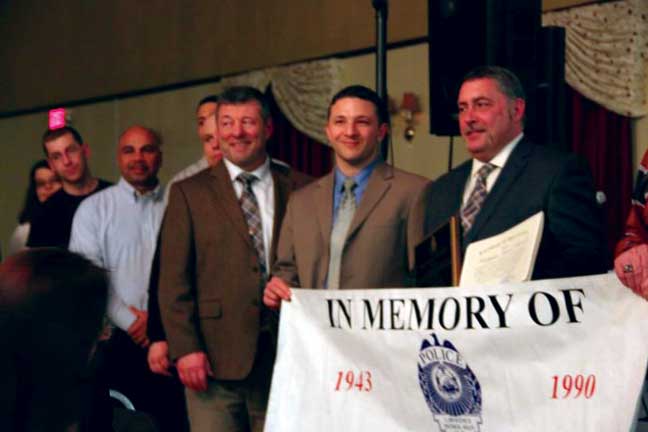 “The 1st Award tonight is given to Captain Jimmy Driscoll who joined the Lawrence Fire Department in 2002,” Chief Moriarty said.

“He was promoted to Permanent Lieutenant in 2011, and then promoted to Captain on April 26, 2015 where he took over the Fire Prevention Bureau.

There, not only did he have the responsibility of previewing construction plans, sprinkler drawings, and keeping current with the ever changing codes and laws … but as the Captain, he also has to meet with contractors about the numerous projects undergoing in the city. He is also responsible for the fire investigation and public education programs that are continuously in demand.”

“Captain Driscoll completely overhauled the inspection program for the City of Lawrence, and has mentored numerous younger firefighters in their careers, convincing them to study for promotions, attend classes, and even transfer to fire prevention to broaden their extent of knowledge, which in turn has also improved our relationship with the general public.”

“Captain Driscoll does not just provide leadership to the Fire Prevention Bureau; he is also the President of the Relief’s In, having saved the club in dire times and turning it into a very successful business.” 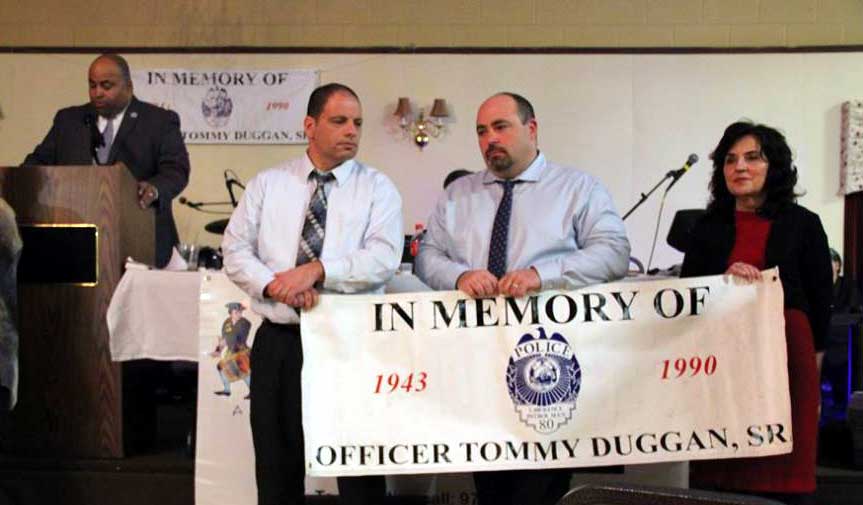 “On, Jan 25th this year, Officer Mike Laliberte was conducting a vehicle stop on Mount Vernon Street when he heard a call dispatched over the radio. The location of the call was also on Mount Vernon St., so Mike rushed to the scene of the incident.”

“A Women on the 911 line said that she was driving when her sister, a passenger in the vehicle, had passed out and was bleeding.”

When Officer Laliberte arrived, the woman was unresponsive and without a pulse. Mike pulled the woman from the car onto the ground, administered CPR for roughly 4 minutes, and when the EMTs arrived and took over, the woman was alive as she was taken by ambulance to the hospital.”

“It was the first time in his fifteen year career as a police officer that he ever performed CPR. Ladies and gentlemen, Lawrence Police Officer Mike Laliberte.” 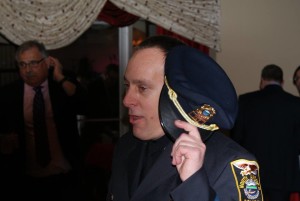 At this point in the evening, Chairman of the North Andover Board of Selectmen, Rosemary Smedile came to the podium to explain why North Andover Police Sgt. Dan Lanen received the award, while selectman Phil DeCologero stood with Sgt. Lanen, holding the banner with Officer Duggan’s name on it.

“Our final Officer Tom Duggan Award tonight goes to North Andover Police Sergeant Danny Lanen. Dan was hired as a police officer 1994 and promoted to Sgt. in 2012. He is the officer in charge of the 4-12 shift and is the department’s Medical Officer.”

“On September 11th last year, Officer Dan Lanen was on his way to the North Andover Mall for a lunch break. While en-route, he saw a car pulled to the side of the road with a female lying in the road unconscious.”

“Sgt. Lanen immediately recognized the signs and symptoms of opioid overdose and, as the department’s Medical Officer, quickly used the Narcan from his duty bag, and performed breathing on the woman with help from other officers, saving the woman’s life.”

“Officer Lanen has also performed several other heroic acts. In 2009, he was first to respond to a call of a person drowning in Berry Pond. After running a quarter of a mile to get to the pond, Lanen jumped in 45° water to search for the victim.”

“While Dan was not successful in saving that victim, he very well could’ve lost his life that day in the attempt. For those of you who don’t know Berry Pond, it’s a pond at the end of Sharpner’s Pond Road, full of rocks and debris. He was truly, truly risking his life.”

“For these reasons and so many more, we are proud to present the final Tom Duggan Hero Award to Sergeant Dan Lanen.”