By Tom Duggan on March 27, 2013Comments Off on Local Star Anabel burning up the Airwaves 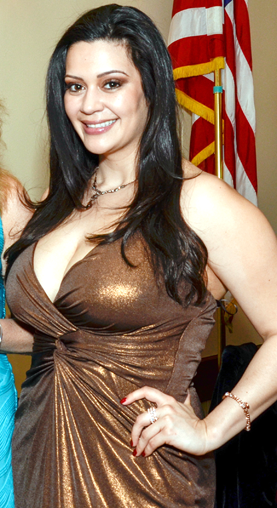 Anabel Gutierrez was born in Huntington Park, CA on December 28th 1985. She moved from California to Mexico at the age of 5, where she learned to write and speak Spanish fluently. Three years later, she moved to Waltham, MA, where she lives to this day.

From an early age, she loved the arts and in middle school and high school she pursued acting, drama, music and dancing classes.

At the age of 21, Anabel began a career as mixologist/bartender at several bars in the Boston area. She was soon offered the chance to work with the Preston Marketing Corporation as a sales model, representing Heineken. Working in these various locales provided opportunities to meet people in the entertainment field.

In 2009, she met television and radio producer David Suazo, who offered her an intern position in the show “Tu Alegria Latina” on radio WRCA1330AM. As an on air personality, Anabel developed her voice, confidence and experience in this new field. Simultaneously, Anabel was coached by Suazo on being in front of a television camera, leading to her becoming a co-host on the show “Boston de Noche TV”. In just three short years, Anabel has interviewed artists and important figures such as Governor Deval Patrick, Los Hermanos Rosario, Rakim y Ken-Y, Arcangel, Farruko, Hector Acosta and Frank Reyes, to name a few.

In 2010, the “Tu Alegria Latina” radio show was cancelled, but Anabel’s her career in radio was just starting. She was offered a position in almost every show that WRCA1330AM radio had, and she chose to work with producer and host Alcibiades Casso on “Tropicalisimo de la Tarde”.

Julio “JulyBoy” Cabrera, famous voice for the largest Spanish-language radio station in Massachusetts-La Mega- soon offered Anabel an opportunity to work with them and she became the official female voice of La Mega in 2011.

Most recently, Anabel participated in the competition and reality TV show Miss Belleza Latina Boston 2012 -where she won the award for “Best Face”. Anabel is currently filming her first movie project ‘Fake This’, due in 2013.

More work soon followed and Anabel is now the official drop/voice-over voice for website companies, 4 different radio stations and over a dozen DJs all over the world.

Juggling between being a co-host for “Boston de noche TV”, radio personality for La Mega, mixologist for some of the best nightclubs in Boston, modeling for Preston Marketing and much more, Anabel Gutierrez does it all.

You can follow Anabel on her official web site (www.AnabelGutierrez.com) where you can buy her posters and contract her to host events! Her Facebook fan page is (www.Facebook.com/ag1228).