By ValleyPatriot on February 26, 2013Comments Off on Looking Back – Christmas at Fenway 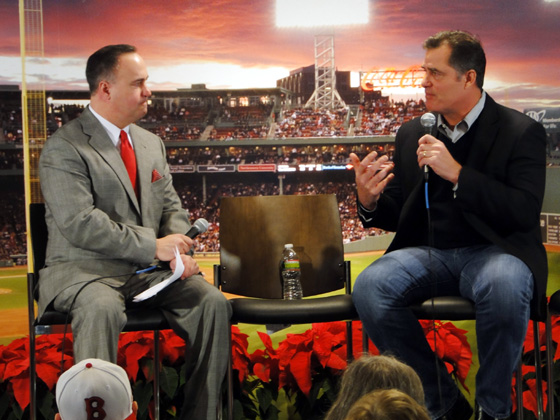 Catching up with President/CEO of the Boston Red Sox Larry Lucchino he said, “This is our tenth annual Christmas at Fenway, and it marks the beginning of the next season in our minds.”

Mentioning the fact that fans can purchase SoxPax, or tickets in general in April and May 2013 games as a Christmas present, the occasion at Fenway was one to attend.

“John Farrell has been warmly received today by all of the folks here,” said Lucchino. “He’s been an enormously popular choice so far, and I’m hopeful it’s going to continue for many years to come. I think he’s a familiar face who knows a lot of what the life and world of the Red Sox is.”

Pitching in the majors between the years of 1987-1996 for the Cleveland Indians, California Angels and Detroit Tigers, Farrell started his off-the-field ball club work as the Director of Player Development with the Indians from 2001-2006. Spending time as a pitching coach with the Red Sox from 2007-2010, he then went 154-170 as the manager of the Toronto Blue Jays from 2011-2012 before being hired to come back to Boston … this time as manager.

Spending roughly $76-million to sign Pitchers Koji Uehara and Ryan Dempster, Catcher David Ross, Short Stop Stephen Drew and Outfielders Jonny Gomes, and Shane Victorino this off season, while acquiring Closer Joel Hanrahan via a trade, the Red Sox still are unsure of what will happen to Catcher/1B Mike Napoli because he failed to pass his physical.

Making his way to Christmas at Fenway, Keith Foulke who closed out games for the Red Sox between the years of 2004-2006 said he has been keeping busy being retired from baseball watching his three boys taking care of his yard.

“It’s huge,” said Foulke,” when talking about being at Christmas at Fenway. “It’s an honor to be invited back to do something with the organization. I love coming back here, helping them out with different charities and stuff, and I just love coming back to Boston.”

When Broadcasters Jerry Remy and Don Orsillo asked Foulke about coming back to baseball and being a broadcaster, he said the show would need to be on Satellite Radio if that happened.

Interviewing Foulke who as everyone knows made the last out of the 2004 World Series, he said, “If I got back into the game I would like to be a bullpen coach or something like that. Being a bullpen guy for pretty much my whole career you learn a lot of lessons the hard way, and as you get older and been around the game you’ve been through some playoff hunts and playoff series. I have come to the realization that you really don’t have any throw away games in a season.”

Christmas at Fenway was a spectacular event for fans of all ages as it not only indulged everyone into the holiday season, but the feeling that the Red Sox will be back before you know it.