When telling a story about “strength of spirit”, Methuen City Councilor Jamie Atkinson wholeheartedly embodies the statement. A lifetime of health hardships hasn’t stopped him from continuing to cross items off of his “bucket list”. From his recent election win to a Methuen City Council seat with a focus on revitalizing downtown Methuen, to coaching Little League in the spring, Jamie’s zest for life inspires all.

Born with cerebral palsy, his life has been regularly interrupted by numerous surgeries, with the last one bringing him closer to death than any person would be comfortable with. One sunny afternoon Jamie headed to the bank, and upon returning home, he found each step closer to home became more and more difficult. Reporting to his doctor landed him in a specialist’s office at St. Elizabeth’s Hospital in Boston then trekking cross-country for a life saving trip to Thompson Hospital in San Diego, CA. It was in San Diego, where Jamie met the nationally renowned surgeon Dr. Jamison, who saved his life from a blood clot lodged in his lung. Upon checking into Thornton Hospital, Jamie was listed as a level three – heart patient. After a 12-hour Pulmonary Thromboendarterectomy (PTE) surgery and two days of a medically induced coma, Jamie sprung back to life – joking with family and medical staff alike. “As a patient, Jamie was hysterical”, shared his nurse Lena Monteiro. “Even being so sick and in pain, he made everyone laugh. He was great to have as a patient.”

Always active, after his Associates Degree in Journalism in 1987 from Northern Essex Community College, Jamie earned numerous sales awards at T-Mobile, often leading the team in the top 5% of sales at the company. After completing his Bachelors of Speech Communications at Framingham State College in 1994, Jamie brought his love of sports, politics and Methuen together, creating a media career from his favorite hobbies. Jamie has hosted a number of award winning television and radio shows including “Patriots’ Pride” on Methuen Cable Access covering sports. He has written for many local publications including the Nashua Telegraph, and currently hosts a weekly online radio show “AM Jive” on Tuesdays live from Java Joe’s from 8-10 am at www.amjive.com.

Jamie first ran for City Councilor in 2007, and lost. In 2011, with two empty seats, he pulled papers in July to make his second attempt at a Methuen City Councilor spot. He followed the standard grassroots candidacy guide: holding signs (as early as July), visiting and hosting local events, and spending time at the Senior Center. Jamie won and started his two-year term in January 2012. As a City Councilor, Jamie commented, “I’m going full force from the start and taking a bold stand for Methuen to be increasingly prosperous. We have a good team of city councilors, a mayor who is a close partner to the city councilor team. Everyone involved has a strong commitment to the community and building a strong Methuen in the face of a national recession.” Some key goals include saving the city money, keeping local services intact in challenging budgetary times, bringing in new businesses to fill the vacant storefronts in the area, and public safety. Former Mayor Bill Manzi has known Jamie and his family for a long time. “Jamie is a wonderful addition to the City Council. He ran and was elected because of his deep commitment to the community, and it’s reflective of a lifetime living in Methuen.”

A lifelong Methuen resident, from the Central District, Jamie cites “family values” as one of his greatest strengths. 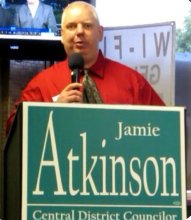 “My parents were always participating in the community and I’m following in their footsteps.” Jamie reminisced about cleaning his father’s insurance office as a child and how that instilled strong work, family and personal values. “If I can help someone reach their potential, it’s rewarding to me. Some people think that I might have been drawn a bad hand with my disability, but I don’t think so.” Jamie continues to be close to his brothers, sisters and other family members including his nephew Matthew Berry, who accompanied him to San Diego for his PTE surgery shared “Jamie is the kind of person you are willing to quit your job for and fly 3,000 miles to sit with in a hospital for five weeks. Family or not.”

What Jamie loves most about Methuen? “… the sense of community. Methuen is a friendly city – everyone knows everyone. People come together for causes that help the community.”

Projects such as “Slimming Down for Seniors” which raised more than $2,000 for a local senior center, or a fundraiser donating caps to Children’s Hospital after the Bruins won the Stanley Cup. Jamie’s generosity and heart continue to extend out to the community with great regularity.

There are few people that have this rare and refreshing perspective of our world and their own community. Persistence, collaboration and optimism are the characteristics that Jamie brings to his community. People like Jamie Atkinson make you want to move to Methuen, don’t they?

Eva Montibello is a child sexual abuse prevention advocate that resides in Haverhill with her two year old son.

Visit enoughabuse.org for tips on how to prevent child sexual abuse in your family and community. evamonti@yahoo.com