By Tom Duggan on September 19, 2013Comments Off on Lt. Colonel Allen West: Race, Poverty, and the Dependency Culture: PART I 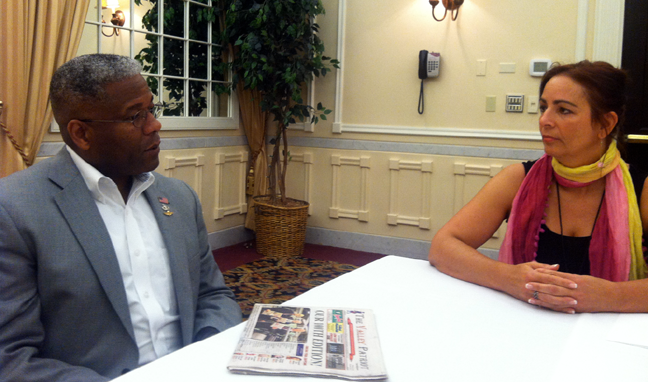 Valley Patriot Publisher Tom Duggan (TD), and Christine Morabito (CM), President of the Greater Boston Tea Party sat down with former Congressman, and Lt. Colonel Allen West to discuss issues such as race, the future of the republican party, the news media’s distorted image of him, the “dependency culture” and poverty.

West was the guest of honor at the Nashua Republican City Committee’s annual “Steak Out” last month. (Video of this event and the interview are available on youtube.)

AW: First of all, I just challenge the other side on principle, and when you have examples of places such as Detroit, when you have California, you have Stockton, you have San Bernardino, when you have an economy that is really going into the tank, we have people who are losing their jobs, being put on part time. You just hit people with the facts, and you hit people with the truth, and, understand that name calling is what they have to do on the other side. You just smile at them and you just continue to press the attack, press the attack. The great thing is that as they say things like that about you, there are going to be other people that start to, “Well, who is this kook-a-man?” And then that gives you the window of opportunity to really… on your Facebook page, whatever, people see certain things and they say, “Well, I agree with that. You know, there is nothing wrong with what he is saying.” And you start to provide folks solutions. Now, anyone can take the 15 to 20 seconds they try to glorify, whatever, but I’m not concerned about everybody. There’s a 30, maybe 35% that they’re enjoying the fact that the government is taking over more aspects of their lives. There are people out there who are happy to be part of a dependent society, but the majority of Americans are not. I would say 60 to 70% are not. Those are the people that I would continue to get out there and get the message to, and the other 30%, we’ll just save them from themselves.

CM: One of your many projects that you’re working on right now is encouraging minorities and veterans to run for public office. 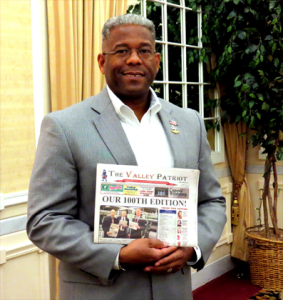 CM: Why is it so important that those two groups in particular get involved in the political process?

AW: First of all, I would say it’s important for military veterans because we understand the sense of service, sacrifice, and commitment to this country. When coming out of World War II and Korea, about 70 to 75% of the members up there on Capitol Hill had served in the military. That makes a difference. And I believe that when you have individuals with that type of discipline, they will not leave for five weeks when you see all the political issues that are facing Congress right now.

When you talk about the minority communities, they are conservative in nature. You just need to go back out and talk to them and reconnect them. That’s why I don’t like the word outreach. I believe it should be policy inclusiveness.

I can give you a good example. If you read the writings of Booker T. Washington from the turn of the century, he was really the first black conservative thinker, because his whole thought was based upon three principles – education, entrepreneurship, and self-reliance. Now if that’s not conservatism, you tell me what it is. And so we just need to go out and have that dialogue. So our Guardian Fund and our foundation is really based upon supporting those types of candidates, and educating those communities, to get them to realize that it’s not so much about party, it’s about principle.

TD: The Democrats have seemed to make an industry out of selling poverty, selling the message of dependency that you talked about, and it looks as though they are trying to sell out the country by trying to allow as many illegal aliens as they can because we don’t know that they can vote…

AW: But you also have some Republicans that are part of that too.

TD: Talk about that. 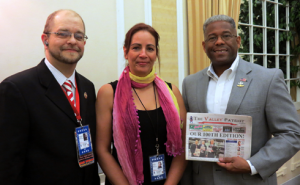 AW: Well, I think that we need to stop reading the The Washington Post and The New York Times, that says if you don’t do this, if you don’t give amnesty and open up the borders, then you’re never going to get the Hispanic vote. First of all, that’s just offensive to Hispanic Americans. And the other thing is that that’s not true. We have to show tangible to the American people that we’re serious about enforcing our laws as far as immigration and securing our border. That’s the failure from 1986 and even Ronald Reagan was quite sorry that he got fooled over that. So I think that, if once again, we are standing on principle and we’re doing the things that are right as far as immigration as well. We’re taking a step-by-step approach; we’re going to be fine. Now, the Black American Leadership Alliance, which is really, the leadership of that group are Democrats, but they came out strongly against Senate Bill 744. They went to the Congressional Black caucus to get support and they told them you’re barking up the wrong tree. So who did that organization BALA go to because they wanted to have a rally on Capitol Hill?

They asked Senator Jeff Sessions to speak. They asked Senator Ted Cruz to speak, and they asked for me to speak, because they know, when you look at the unemployment in the black community right now, this will further exacerbate unemployment. It will further depress wages. The CEO of the Congressional Budget Office already said that. So the facts are on our side. And we can find those places where we can be on common denominator as far as these issues.

And so we don’t need to bring in an influx of illegals that are here to take more jobs from hard working Americans, who want to get back out there, and to depress the wages. So I think that now is a great time where we can find that commonality on that issue of illegal immigration.

CM: You have a no nonsense style of communicating, which tends to appeal to those on the right. How do you respond to your critics that say that some of your language may be bombastic or may turn off those more moderates or independents?

AW: You know, the thing is, when you’re a fire fighter, people are looking for leadership, and I used to tell folks you either get to fight or you get to die. If we don’t have people that will come in and stand on principle and wake up the American people, then the great promise, the great dream of this Constitution of the Republic will be lost. And what is interesting is that I’ve never had anyone say that I was not telling the truth. And I’ll also tell you, there’s a southern quality to be very forthright and straightforward. That’s how my parents raised me.