By Tom Duggan on November 4, 2004Comments Off on MA Rep. Barbara L’Italien’s Attack on the Catholic Church 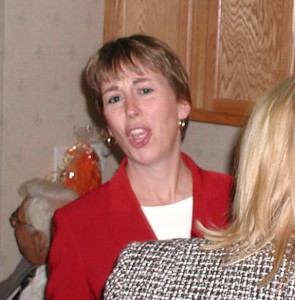 Massachusetts State Representative Barbara L’Italien should be ashamed of herself. She has not only taken a public stand against two of the Catholic Church’s teachings, abortion and gay marriage, (she favors both) the liberal legislator was seen on election day verbally attacking and abusing pro-life activists, some of whom were members of her church parish.

Shortly after the offended parishioners complained to the pastor of St. Augustine’s church in Andover, L’Italien was asked to step down from her leadership spot in the choir.

But it was not her refusal to step down which was most shameful, it was the way she has personally caused division in her parish, bringing controversy and bad publicity on a Church that she pretends to love so much.

When L’Italien’s pastor quietly asked her to step down as a cantor, did she deal with the situation in-house?

Did she speak to higher-ups in the church or try to resolve the matter behind closed doors?

Did she do what any one of us would have done when faced with an internal squabble in our own family?

State Representative Barbara L’Italien shamelessly ran to the media to portray herself as a victim and declared the actions of her priest as “wrong.” It was a display of betrayal and disrespect of the highest magnitude. How she has the nerve to call herself a Catholic is really beyond me…and I’m not Catholic!

As a public figure in Massachusetts, Ms. L’Italien knows the destructive swirling effects that an anti-religious media can have on a single parish. She knows that there are people and organizations (like the Boston Globe) who are just looking for an issue like this to portray the church (and its members) as intolerant and hateful.

he proved where her allegiances were when she ran to the press to make this issue a public spectacle. In short, Representative L’Italien only cares about herself and her own political career, be damned with the fools who strictly believe in Catholic doctrine.

It is no wonder the bishops of the Catholic Church don’t want elected officials who openly challenge the church’s teachings to be up on the alter during mass. What they feared is exactly what has happened, a split among the parishioners and more open defiance of the church’s teaching.

But, this whole episode shouldn’t surprise anyone who followed L’Italien’s bid for reelection.

L’Italien publicly touted herself as both a “Catholic and a Parishioner of St. Augustines Church” in Andover to get votes. This was to signal good Catholics who actually believe in the Church’s teachings that she stood with them on moral issues.

Yet, all-the-while L’Italien was accepting donations and endorsements from gay marriage activists, voting for gay marriage in the legislature, and promoting herself to liberal organizations (like the Boston Globe) as a pro-abortion legislator.

Regardless of your stand on abortion or gay marriage, the issue here is that State Representative Barbara L’Italien wants to represent a church, on their alter, during religious services, while publicly attacking the core teachings of that church when mass is over.

I know of no civic, religious, or political organization that would tolerate one of its members actively working against their interests and teachings. Father Clearey was right to ask L’Italien to step down. It is too bad she didn’t have the good sense to either do so or take up the issue with her fellow Catholics quietly, instead of airing their dirty laundry in public.