By Tom Duggan on May 11, 2016Comments Off on MA State Auditor Wins National Award for Combatting Waste at MassHealth

Massachusetts State Auditor Suzanne M. Bump has been selected to receive the National State Auditors Association (NSAA) Excellence in Accountability Award for its audit of payments made by MassHealth for services that should have been paid for by Managed Care Organizations (MCO). The audit for which the Auditor’s Office will receive this award found over half-a-billion dollars in improper or unnecessary payments, and missed savings opportunities by MassHealth. Bump will accept the award on behalf of her agency at the NSAA’s Annual Conference in June.

“Since taking office, I’ve sought to bring accountability and transparency to government,” Bump said of the award. “This award is a recognition of the talents of my staff, as well as the power and value of the data analytics capabilities we have developed.”

The audit, which was released in June of 2015, examined claims paid by MassHealth that should have been paid by affiliated MCOs. This error resulted in $233 million in unnecessary payments by MassHealth. In addition, the audit found that the agency could have saved up to $288 million if its MCO contracts had been more specific about which services should have been covered. It was the single largest finding by the State Auditor’s Office in at least 27 years.

Bump estimates that changes made as a result of the audit will save approximately $50 million annually going forward. As a result of the audit, MassHealth has implemented changes to its system to better detect and deny claims for members’ services covered by MCOs. It has also implemented increased controls of MCO contracts to ensure appropriate coverage and payment of contract services, and has engaged MCOs in the creation of a master code list to identify MCO covered verses non-covered services.

The Auditor’s Office used its data analytics capabilities to examine 25.5 million fee-for-service claims for MCO enrollees and assess whether payments for those claims were appropriate.

“While the findings of this audit and its resulting costs savings are substantial, equally important is the impact our work has on building public trust in government,” Bump said of the audit. “Our work demonstrates to the residents of the Commonwealth that there is an independent voice representing them, tackling management deficiencies in state government.” 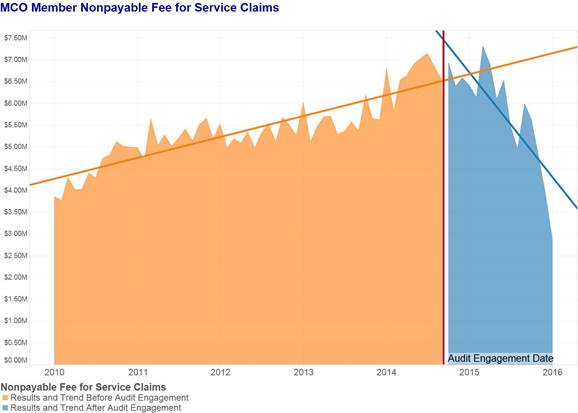 The nominations were judged by other state auditors across the country, and were evaluated on a number of criteria, including the audit’s impact on state government, its use of innovation and the actions that resulted from the audit findings.

Bump has championed innovative uses of technology, particularly data analytics, to enhance the abilities of her office. These technologies have not only led to more impactful audit findings, but have been integrated throughout the agency, including efforts to combat public benefits fraud.

The NSAA is part of the National Association of State Auditors, Comptrollers and Treasurers, (NASACT) whose mission is to assist state leaders to enhance and promote effective and efficient management of governmental resources. The NSAA 2016 Annual Conference will take place June 14 to June 16 in Beaver Creek, Colorado.

Bump’s entry for the award is available at: http://www.mass.gov/auditor/docs/massachusetts-office-of-the-state-auditor-2016-nsaa-submission-overview.pdf

MA State Auditor Wins National Award for Combatting Waste at MassHealth added by Tom Duggan on May 11, 2016
View all posts by Tom Duggan →