By Tom Duggan on January 28, 2020Comments Off on Lowell Man Arraigned for 2018 Hampshire St. Execution in Lawrence

The Essex County District Attorney has charged Anderson Jorge Cruz, 21, of Lowell, in Salem Superior Court in connection with the execution of Juan Bautista Mejia Arias, 39, in Lawrence back in 2018.

The case is scheduled for a pre-trial conference on February 25, 2020.

On June 6, 2018 at approximately 6:20 pm, Lawrence Police responded to Hampshire and Alder Streets for a report of shots fired. Upon arrival, the located the victim suffering from multiple gunshot wounds. He was pronounced dead at the scene.

The defendant was indicted by an Essex County Grand Jury on August 16, 2019 for murder.

Cruz has been in federal custody since his arrest on January 23, 2019 for heroin and fentanyl trafficking.

He pleaded guilty to conspiracy to distribute and possession with intent to distribute one kilogram or more of heroin and fentanyl and other drug trafficking offenses. Cruz has been in custody since his arrest on Jan. 23, 2019, along with co-defendant Joshua Ramos-Rios. Cruz is scheduled to be sentenced before U.S. District Court Judge William G. Young on Jan. 14, 2020.

Lawrence police were called to Hampshire and Alder Streets early Wednesday evening for a call of shots fired “one man down”.

When police arrived at the scene they found a man in his 30’s wearing red, face down on the sidewalk with at least six bullet wounds to the back. 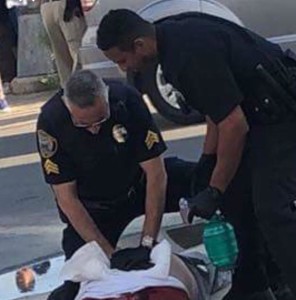 Lawrence Police Sgt Michael Simard did CPR chest compression on the victim but could not revive him. This is Lawrence’s 3rd murder for 2018. Last year at this time Lawrence had 8 murders.

According to witnesses the victim came out of a bodega on Hampshire and Alder Street after purchasing groceries, and crossed Hampshire Street headed towards the Arlington School when a black Hyundai, Sante Fe with a black roof rack and five point rims pulled up with at least three occupants in the car.

Police say video from a local business shows the car pulling up to the victim, two men in the front seat and a third man stepping out of the vehicle from the back firing the shots that killed the victim.

Police could not get a plate number on the car, but it was identified with Pennsylvania license plates.

The victim, wearing a red shirt was in a gang neighborhood well known to use red hats, shirts and sneakers as their gang colors.

The District Attorney’s Office, which micromanages local police on murder cases, has refused to give the public a press release with details on the crime as of 9am Thursday morning.