Man Who Recorded, Interfered with Arrest is Himself up on Drug Charges

By Tom Duggan on April 23, 2015Comments Off on Man Who Recorded, Interfered with Arrest is Himself up on Drug Charges

According to documents obtained by the Valley Patriot, the man involved in videotaping police officers and walking between police and suspects during a a drug arrest, (see initial story below) is himself on charges for drugs.

Initially, identified as Jay Carattz by an on line “news” blog the Bay State Examiner,  police reports show the man’s name is John Carattini and was arrested on drug charges in 2013. The bay State Examiner has since updated their story with Carattini’s real name.

A police report from July of 2013 shows that Lawrence Police, following up on an investigation into a previous armed robbery and shooting at a home on Bennett Street, executed a another search warrant to find John Carattini and others in the home with heroin, scales and drug packaging paraphernalia.

Carattini has been hailed in social media blogs as a first amendment hero who was targeted by police for filming them during an arrest. Police officers, however, say that Carattini could have been hurt during the incident and that Carattini walking between them and the suspects they were arresting put everyone on the scene at risk. Police say that Carattini’s cell phone was initially confiscated to make sure one of the victim/witnesses were not shown on the video for their own safety, and returned the phone to Carattini. 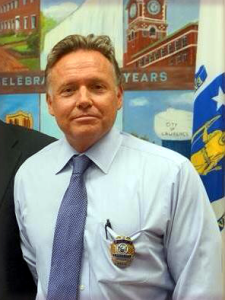 The actions of a Lawrence police officer during a drug arrest have gone viral on the internet, gaining the attention of anti police activists and news organizations hostile to law enforcement like the Bay State Examiner.

At issue (seen above) is a Lawrence man who decided walk in between police officers and the suspects being arrested on drug charges. The man, identified by the Examiner as Jay Carattz, recorded the incident which lead to one of the Lawrence police officers confiscating his phone and detained him for interfering with a police investigation.

Acting Lawrence Police Chief James Fitzpatrick addressed the issue in a press release saying that both Mr. Carattz and the officer could have shown better judgement, but that Carattz should not have interfered with police officers while performing their duties.

“On Wednesday, Lawrence Police Officers were arresting multiple drug suspects when a citizen walked through the arrest scene, between the suspects and the officers, with an active video camera. That citizen was detained by the officers.”

“Having viewed the video, which was posted to social media it appears that both parties – the citizen and police officers –should have used a different approach. No one, for their own safety, should walk between police officers and suspects during an arrest, and police officers should always conduct themselves in a courteous manner, regardless of how high emotions may run during arrests.”

Fitzpatrick also stated that an internal police investigation is being conducted and he will await the results of that investigation.

“The proliferation of cameras, both fixed and mobile, in this day and age means that the actions of police officers and criminal suspects alike are subject to the greater levels of scrutiny than ever before in history. As a police chief, I welcome scrutiny because it will result in better policing and better police officers.”

The chief said he welcomes the input of the community on this matter.

Man Who Recorded, Interfered with Arrest is Himself up on Drug Charges added by Tom Duggan on April 23, 2015
View all posts by Tom Duggan →