By Christine Morabito on September 11, 2014Comments Off on Manhattan on the Mend – 13 Years Later 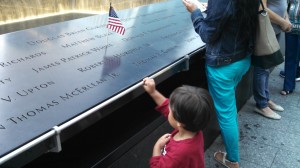 As much as I long for quiet solitude these days, there is something magical about New York City that keeps drawing me back. As a child, growing up on Long Island, my Aunt Annie would take me to the city’s posh restaurants. I credit her with introducing me to the wonderful world of ethnic food.

I have moved many times since childhood, but I still make a pilgrimage back every few years. My agenda includes 3 things: eating a bagel with lox and cream cheese from Carnegie Deli, enjoying a slice of real New York pizza – bigger than my head, of course, and visiting Deco Jewels, the ultimate girly-girl store in the Village.

My fondest memory is meeting Jackie Mason while walking through the Theater District with my friend Jamie. We stopped to say hello and he graciously invited us to his show that evening, promising two tickets in our name. The show was absolutely hilarious. Afterwards, he treated us to a lovely dinner, and so began a romantic relationship between my friend and the aging comedian.

The horrific events of 911 affected me on a deeply personal level. I worried for friends and family living and working nearby. Laura, my best childhood friend, had been working on Wall Street and we had not spoken in a while. I was relieved to learn she had recently taken another job in Midtown Manhattan. She was rattled, but safe.

On a recent trip to NYC, Laura and I visited the 911 Memorial together. The last time I was there they were still finding body parts among the rubble. This visit was significantly more positive. While it has been 13 years since the terror attacks, the memorial remains a work in progress. Despite the delays, the project is an architectural marvel. The new World Trade Center complex consists of 5 new skyscrapers, a moving memorial to the nearly 3,000 dead and a state-of-the-art transportation building. This replaces the earlier complex of 7 buildings on the same site, including the iconic Twin Towers. All previous buildings were either directly destroyed by the attacks or so severely damaged that they had to be demolished.

Most noticeable at the site was the huge police presence. The 911 Truthers were also plentiful – but that’s a story for another day.

Hauntingly impressive are the two enormous pools with the names of the dead inscribed in bronze on the walls. In Bobby Cuza’s piece, “9/11 A Decade Later: Memorial Pools’ Waterfalls Are A True Engineering Feat,” he describes, “sheets of water cascading 30 feet down into twin reflecting pools set in the footprints of the Twin Towers.” They have the distinction of being the largest manmade waterfalls in North America.

We stood by the pools for a long time and listened as others shared their stories; where they were when the planes hit, what they were thinking and feeling as new information flooded in. It was as emotional as it was surreal.

Still under construction is a curious, wing-like structure that is to be the Transportation Hub. To me it resembles a giant white asymmetrical hair comb. The project is expected to be completed by 2015.

The new One World Trade Center, or Freedom Tower is now complete, standing over 100 stories, the tallest building in the Western Hemisphere.

We were not able to visit the museum, but by all accounts, it is phenomenal. The underground exhibit is built around artifacts from Ground Zero, like two 50-ton beams and a demolished fire truck recovered from the wreckage. On display is part of the staircase where hundreds of people attempted to escape one of the buildings before it collapsed. Pictures and touching audio submitted by survivors’ families describe those they lost.

There is always an uplifting side to horrible tragedies. One of those is the story of St. Paul’s Episcopal Church. Just 2 blocks from the site, the building sustained only a layer of ash and some broken windows. During the following days and months, that church became a beacon of hope, and the center for rescue and relief workers.

While excavating the old site, workers dug up the hull of a ship believed to be from the 1700s. According to archaeologist, Molly McDonald, “about one-third of lower Manhattan is man-made, constructed sometime between 1797 and 1836. Prior to 1797 the site of the ship was part of the Hudson River, as was about half of the ground zero site.”

A resilient pear tree, now known as the Survivor Tree, found in the rubble long after it was believed anything would be found alive, is now thriving at the memorial site. Such things remind us that we can endure just about anything.

On the train back to Boston, I fought back tears as I watched the new Manhattan skyline fade into the distance. The wounds are deep but are beginning to heal.