By Tom Duggan on July 25, 2014Comments Off on Market Basket Board Affirms New CEO’s, Consider’s Buyout by Arthur T.

The board of directors of Market Baskets met Friday afternoon and issued a statement after their meeting confirming that they have received a bid by Arthur T. Demoulas and smaller shareholders to purchase the remaining 51% of Market Basket Supermarkets. The board also voted to reaffirm their choice of  Co-CEOs Felicia Thornton and James Gooch to manage the Company.

Thousands of Market Basket workers rallied at the Market Basket in Tewksbury Friday in what they called their “last rally” for Arthur T. Demoulas the now fired CEO. 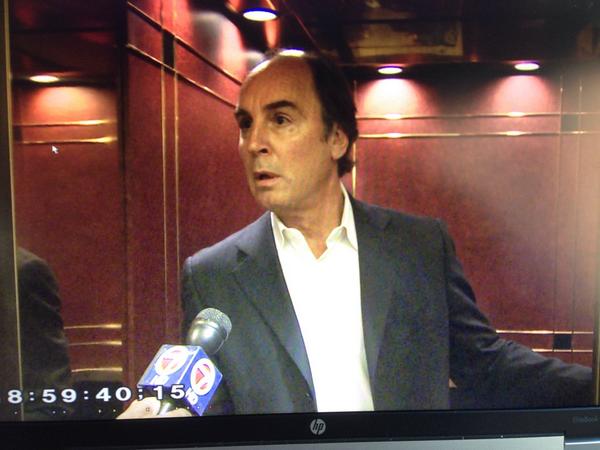 Channel 7’s Byron Barnett interviewed Arthur S. Demoulas on his way into today’s meeting.  Barnett tweeted after the interview “He was evasive and stone silent when I asked him to say anything at all to Market Basket workers & customers.”

Statement from the Market Basket Board of Directors:

“The Board of Directors of Demoulas Super Markets met today and confirmed that the Company has received an offer from Arthur T. Demoulas and the other “B” shareholders to acquire the remaining 50.5% of the shares of the Company. The Board said that the offer was received prior to the deadline for the “B” shareholders to present a proposal. Consistent with its fiduciary obligations, the Board will evaluate and seriously consider this proposal, along with any other offers previously received and to be received. Following its evaluation of all of the offers, it will convey its recommendations to the Company’s shareholders.

The Board acknowledges that it has heard from many stakeholders. The negative behavior of certain current and former associates is at variance with the Company’s culture of putting the needs of the Market Basket customers first. It is now clear that it is in the interests of all members of the Market Basket community for normal business operations to resume immediately. Furthermore, the Board reaffirmed its election of Co-CEOs Felicia Thornton and James Gooch to manage the Company in accordance with the Company’s bylaws.”