Mass. Board of Medicine is a Grave Danger to Patient Safety

By ValleyPatriot on June 28, 2016Comments Off on Mass. Board of Medicine is a Grave Danger to Patient Safety 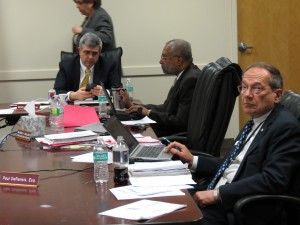 The Massachusetts Board of Registration in Medicine has now been proved, twice, to work against public safety, against the very reasons we taxpayers fund it’s very existence.

The first case involves Dr. Michael Langan, who worked for years at MGH taking care of our elderly. He also served on the Spaulding Pharmacy Committee, which decides which brand name medicines to include on the hospital formulary. As an honest physician he felt there was no benefit to including Crestor, as it was an outpatient prescription. AstraZeneca felt otherwise because inpatients begun on an expensive brand drug would order their primary physicians to refill it as “MGH started me on it and you think you know better?”

An AstraZeneca employee thus reported Dr. Langan to the Board as being an alcoholic. He was immediately removed from practice and immediately; Crestor was included in the hospital formulary.

Thanks to our Board of Medicine that, 5 years ago, was the beginning of his hell. Dr. Langan was never, and is not, an alcoholic. It was a pure lie. The Board forced him to return his medical license, forced him to attend psychiatric sessions in expensive private clinics out of state, forced him to attend 3 AA meetings a week, and forced him to spend $80,000 on urine drug tests.
And when not a single drug test was positive for years, the Board’s contractor (PHS) faxed an order to Quest Labs to change the lab sample number from someone else’s sample to Dr.

After all, no doctor in Massachusetts should be allowed by the Board to practice after displeasing a giant pharma multinational. An example had to be made. The Board now claims, in writing, that even the SJC has no power to restore Dr. Langan’s license.

Dr. Langan, his wife and three children are on course to becoming homeless in about a month because Governor Charlie Baker’s Office, in command of all the facts, has chosen to support the

Board and it’s unlawful total erasure of honest physicians.

The other case is that of Dr. Sheldon Schwartz.

For-profit Arbour-HRI Hospital and it’s parent corporation, UHS, have been in the news for years due to severe patient neglect and an exclusive focus on 30% profits.

Dr. Schwartz was the one medical doctor the entire staff depended on daily to correct errors and keep patients safe. After Dr. Schwartz was forced out, inevitably the administrators managed to kill one patient by the name of LoriAnn Durant, exactly as Dr. Schwartz warned.

Arbour lied to the Board in writing that they had terminated Dr. Schwartz for “disruptive behavior.” Actually, he had resigned in disgust.

The Board has now taken up cudgels on behalf of UHS, a private for-profit corporation, and against the patients of Massachusetts.

The Board dragged Dr. Schwartz to a “disciplinary” hearing. But get this, the Board sent the witness list to UHS’ lawyer first. That UHS lawyer then contacted the witnesses to come testify ‘on behalf of’ the Board. That UHS lawyer then herself sat in at a Board “disciplinary” hearing and even stood up to object to a question a ‘Board witness’ did not want to answer truthfully.

A Yale-trained nurse practitioner then spoiled the Board’s party by testifying that she had been very anti-union prior to joining Arbour, but became strongly pro-union by the time she left, as the union was the only force left to exert any pressure on behalf of the patients. Thanks to the Office of Governor Charlie Baker, doctors now are too scared of the Board to advocate for patient safety.

It was impossible to tell where a private corporation ended and the Board of Medicine began. The Board’s lawyer, James Paikos, repeatedly threw questions at witnesses aimed at salvaging Arbour Hospital’s name, claimed that Arbour had done everything to preserve patient safety and that Dr. Schwartz was irrational, unintelligible, out of control. Email me for the transcript.

It was fascinating to see a Board lawyer act openly as Arbour’s lawyer when Arbour Hospital neglected patients to the point of death. And he did it knowing a well-regarded Globe reporter was in the room watching.

The Board is this blatant because it has the active written support of the Office of Governor Charlie Baker that the Board’s story is the Governor’s story, regardless of the evidence, there is no sunlight between them, and it is their joint aim that doctors who support patient safety should be erased in order to serve as examples to the rest.

The fish rots from the head down.

BORIM, Danger to patients, Massachusetts Board of Medicine