By Tom Duggan on April 10, 2013Comments Off on Massachusetts Law Enforcement and FBI Seek “Merrimack Valley Bandit”, Armed and Dangerous

BOSTON – A task force of Massachusetts law enforcement agencies is seeking the public’s assistance to identify a bank robber allegedly responsible for seven armed bank robberies in northeastern Massachusetts since February. The “Merrimack Valley Bandit” is considered armed and dangerous.

A task force composed of the FBI and police departments from Lawrence, Methuen, Dracut, and Groveland is asking the public to review photos of the robber at https://bankrobberies.fbi.gov. A white logo on a jacket worn in one of the robberies may be recognizable by someone familiar with the suspect. Although the specific design is not distinguishable in the surveillance photos, it may provide useful information about the identity of the robber. Further, the robber is described as having thin eyebrows.

Additionally, through a partnership with Clear Channel digital billboards in the Merrimack Valley will be used to seek tips from the public.

The same person is alleged to be responsible for the following robberies:

On February 21, 2013, TD Bank, 547 Broadway, Methuen, MA, was robbed at approximately 6:30 pm. The robber entered the bank, threatened harm to the tellers and demanded money. After exiting the bank, he may have entered a white or silver vehicle. He is a white male, approximately 5’9” wearing a white mask, gray-hooded sweatshirt, blue-zippered jacket or sweatshirt with a white logo, faded blue jeans, black sneakers, and a black glove on one hand.

On March 12, 2013, NESC Credit Union, 244 Pleasant St, Methuen, MA, was robbed by an armed white male at approximately 10:30 am. He was less than 6 feet tall and wore a black baseball hat, gray- hooded sweatshirt with two black stripes running down the shoulders with its sleeves cut off near the elbow. Under the hooded sweatshirt, he wore a long sleeve white shirt. He wore baggy blue jeans and a black glove on his left hand. His face was obscured by black sunglasses and a black mask covering his nose and mouth. 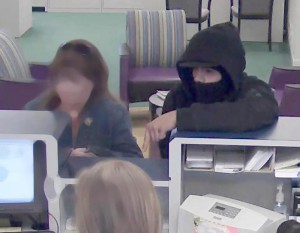 On April 8, 2013, at approximately 5:29 pm, TD Bank, 1255 Bridge St., Dracut, MA was robbed by an individual with the same physical description described above.

On April 9, 2013, at approximately 2:12 pm, TD Bank, 280 Main Street, Groveland, MA was robbed by an individual with the same physical description described above.