By Tom Duggan on July 26, 2016Comments Off on Massachusetts Office of the State Auditor Wins Award for Accountability Practices 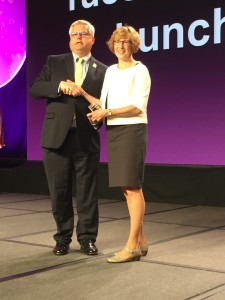 (WASHINGTON, JULY 19, 2016) — AGA has awarded its prestigious Einhorn-Gary Award to the Massachusetts Office of the State Auditor (OSA) for its contributions to furthering government accountability. The OSA’s audits of state government’s programs, departments, agencies, authorities, contracts, and vendors, and advanced data analytics capabilities, have helped identify areas of inefficiency and fraud in state government and have provided recommendations for resolution, 95 percent of which have been implemented since 2011.

AGA presented the award — which in the past has only been presented to a person rather than an entity — at its Professional Development Training event July 19. In recent years, OSA has:

 developed sophisticated data analytics capabilities that are, among other things, helping to address opioid addiction via work with other entities to identify and crackdown on doctors who are over-prescribing these drugs;

 conducted audits that have led to: millions of dollars in savings to taxpayers through Medicaid alone; better sexoffender registry checks for childcare workers; improved evidence and efficiency in the Superior Courts; creation of an online elevator inspection system that increases its ability to manage the process; better checks on who is eligible for public assistance benefits; creation of a tracking system for vacant units at housing authorities to improve the rate by which units can be filled; and renovation of the State Office of Pharmacy Services’ IV room to be compliant with federal safety regulations;

“In 2011, we created a roadmap to commit ourselves anew to excellence in auditing for the people of Massachusetts. This award is a testament to the work of my staff to execute this plan and provide independent oversight of state agencies in the Commonwealth,” Massachusetts State Auditor Suzanne M. Bump said. “Our work to promote accountability, transparency and innovation to rebuild public trust in government is just beginning. We’ll continue to build on our work, particularly in the area of data analytics, to make government work better, and ensure the residents of the Commonwealth know public entities are responsible stewards of taxpayer dollars.”

John Homan, AGA’s 2015–2016 National President, said the OSA represents government financial management at its best. “OSA’s comprehensive analytics and sound recommendations exemplify how technology can be used to improve government accountability,” Homan said. “It has saved taxpayers millions of dollars; helped state programs, departments and agencies maximize efficiencies; and enabled Massachusetts to serve all citizens better. And, OSA’s contributions to AGA by encouraging employees to become members and attend training events serve as a testimony to the dedication OSA feels to continuous improvement.”

AGA presents awards to members of the government financial management community who have contributed to the profession and AGA through their leadership and research.
About AGA: AGA is the member organization for government-finance professionals. We lead and encourage change that benefits our field and all citizens. Our networking events, professional certification, publications and ongoing education help members build their skills and advance their careers.

Massachusetts Office of the State Auditor Wins Award for Accountability Practices added by Tom Duggan on July 26, 2016
View all posts by Tom Duggan →