By Tom Duggan on June 7, 2010Comments Off on Massachusetts Police Officers Honored at National Police Memorial

Names of three Mass. police officers killed in 2009 added to

Last month more than 25,000 police officers and families filled the grounds of the National Law Enforcement Officers Memorial in Washington DC for a candle light vigil honoring the 116 police officers who were killed in the line of duty in 2009.

Among the officers honored for making the ultimate sacrifice were: Massachusetts State Trooper Richard Cashin who was killed in a car accident on January 28, 2009, Weymouth Police Officer Michael Davey who was struck by a vehicle while directing traffic around a utility work site on August 24, 2009, and Worcester Sargeant Michael Towner who died on April 7, 2009 after a fall while struggling to arrest a violent suspect.

The names of all three of these heroes were read aloud as part of the roll call of honor and their names permanently etched into the walls of the memorial. 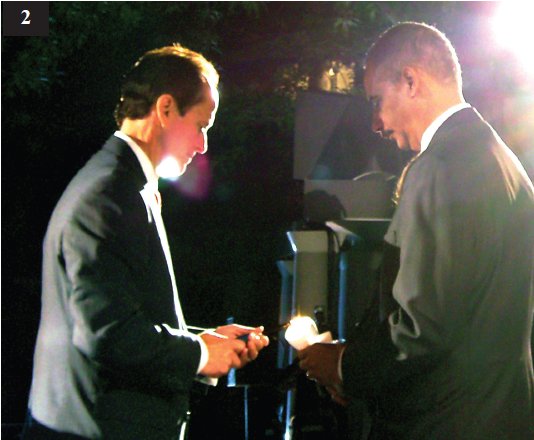 Director of Homeland Security Janet Napolitano, U.S. Attorney General Eric Holder, FBI Director Robert Mueller and several other members of the Obama White House spoke at the candle light vigil thanking the families of slain officers for the sacrifice of their loved ones.

“Tonight is testament to the indispensable role the Memorial Fund plays in honoring the service and sacrifice of our nation’s men and women in uniform – not only at this annual vigil but every day of the year,” Attorney General Holder told the crowd.

“It was 218 years ago this month, in 1792, that an American law enforcement officer – Deputy Sherriff Isaac Smith of Westchester, N.Y.,– was first killed in the line of duty. Since that day, approximately 20,000 law enforcement officers have also made the ultimate sacrifice. Tonight, we add 325 to this memorial. Two hundred and nine were men and women unknown to this wall until the Memorial Fund resurrected the details of their sacrifices. And 116 were killed in the line of duty this past year.”

“Although no memorial, no ceremony, and no salute can ease your pain and special burden, there is something you must know. The gratitude that I, along with the many law enforcement professionals here tonight, feel for your loved ones is shared by the entire law enforcement community and an entire nation. We are all safer for their sacrifice. And we will always be inspired by their example of service. 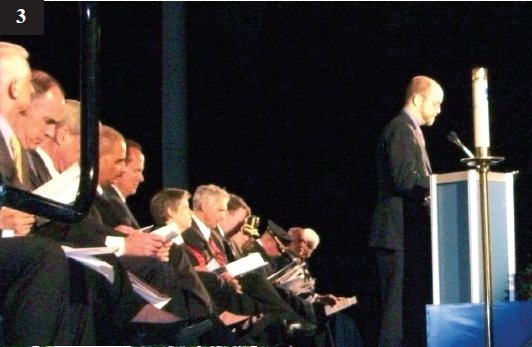 Unspeakable tragedy may be what brings us here. But our unending appreciation – for the unsung work of law enforcement – is what binds us, and binds all Americans, together. These officers secured our neighborhoods and our nation. And they did so willingly, embracing their essential roles from day one. They were part of something greater than any one man or woman. They were part of one of America’s earliest, finest and most noble traditions. They define what is best about our country.

So, while we may grieve, we must not despair. The choice of these heroic men and women to live for their country was made with the understanding that they could die for it, too. Their choice reminds us of just how brave – and how remarkable – they were.” 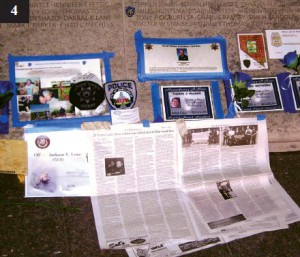 Valley Patriot editor Tom Duggan Jr. was among those on stage during the event and read aloud from the roll call of fallen officers during the ceremony. Duggan’s father, Lawrence Police Officer Tom Duggan Sr. was beaten to death with a baseball bat on a busy downtown street in broad daylight in March of 1990. His name was added to the memorial in 1991.

Amesbury Police Officer Jason Kooken took part in Law Enforcement United’s bicycle run to Washington DC to raise money for the children of police officers killed in the line of duty. Kooken dedicated his ride to the memory of Duggan’s father and presented Duggan with a steel arm band with is father’s name on it at the memorial wall after the ceremony. 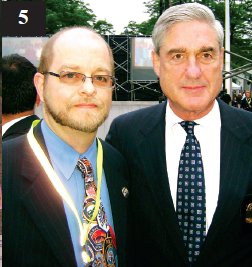 “It was a great honor to be up on stage with the director of Homeland Security, Janet Napolitano, Eric Holder and FBI Director Bob Mueller not to mention Craig Floyd who has done an unbelievable job getting this memorial built,” Duggan said. “But, when officer Kooken handed me the wristband he wore during his ride down here, especially on this spot where my dad’s name is engraved on the wall, it left me speechless.”

Two days later, President Obama spoke at a memorial service held by the Fraternal Order of Police (FOP) on the lawn of the U.S. Capital where the family members and partners of slain officers placed a flower in the FOP wreath signifying the lost officer.

“Every day in America, families go about their lives,” President Obama told the thousands of attendees at the service. “They wake up, sit down for breakfast, send their kids off to school. Then they head into the office, or onto the factory floor. And after putting in a honest day’s work, they return home, ready to do it all over again in the morning. 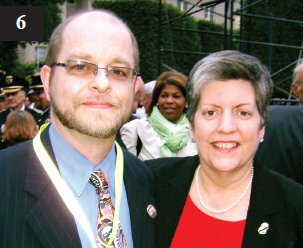 We often take it for granted, this cycle of life. We know, of course, that chance can change everything overnight. But we also rely on a certain order in our lives, a certain sense of security that lets us sleep safely in our beds and walk around our neighborhoods free from fear, and go about our daily lives without being the victims of crime.

That sense of security doesn’t come on its own. What makes it possible — what makes freedom possible — are the law enforcement officers that we honor today. It’s men and women like so many of you. It’s anyone who’s ever put on a uniform or worn a badge in the name of law, in the name of order, in the name of protecting and defending the United States of America.”

Photo 1) President Obama places the first flower in the Fraternal Order of Police Wreath signifying a fallen officer from 2009. 2) Chairman of the National Law Enforcement Officers Memorial, Craig Floyd (who is personally responsible for the building of the memorial in 1991 and the annual ceremony honoring slain officers) with Attorney General Eric Holder lighting the first candle during the vigil, 3) Valley Patriot President Tom Duggan, Jr. reads from the roll call of honor 4) A copy of The Valley Patriot’s tribute to Lawrence Police Officer Tom Duggan taped to the wall of the Police memorial at panel 36 West where Duggan’s name is engraved, 5) Tom Duggan with FBI Director Robert Mueller who read from the roll call of honor and has been a frequent attendee of the annual memorial service, 6) Tom Duggan with Director of Homeland Security, Janet Napolitano, 7) Amesbury Massachusetts Police Officer Jason Kooken touches the wall where the name of fallen Lawrence Police Officer Tom Duggan Sr. is engraved on the national memorial, 9) A blue lazer beam shoots over the crowd of 25,000 police officers and family members during the candle light vigil representing the thin blue line of law enforcement, 9) A police Survivor (family member of a fallen officer) bows down to read the names on the memorial amid personal effects and tributes left by partners and family members, 10) Police officers march on the lawn of the U.S. Capital among thousands of officers from across the country at the conclusion of the Peace Officers Memorial Service.