Reading the headlines in the major newspapers one definitely gets the impression that President George W. Bush has banned stem cell research. Claims by presidential candidate John Kerry that President Bush is “ignoring science” in “his ban on stem cell research”, and claims by Vice Presidential candidate John Edwards that the president “must end the stem cell ban” were prominently covered by the mainstream news media after the convention.

From the Boston Globe and the New York Times, to CNN and NBC news, the Democrats claim that President Bush “banned” stem cell research has gone completely unchallenged. This has left the American people with the impression that Bush is “ignoring science” in Kerry’s words and put a stop to research which could result in treatments and cures for diseases like Parkinson’s, Diabetes and Alzheimers.

But according to the office of Management and Budget, George Bush has not only expanded finding for stem cell research but, for the first time ever he federally funded human embryonic stem cell research. He did so with one provision, that no new embryos be destroyed during the research activities.

In 2001 the federal government spent $0 on human embryonic stem cell research. But in 2002, President Bush spent more than $10.7 million for the research and in 2003 he increased that spending to $24.8 million. This is a far cry from Kerry and the media’s claim that he “banned” the research altogether. 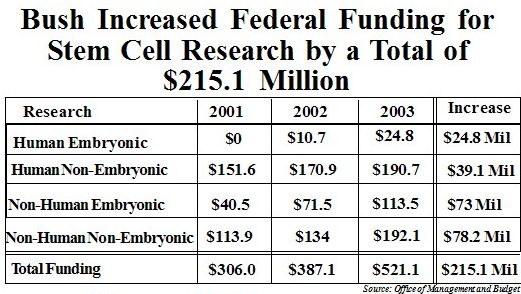 On August 9, 2001 President Bush told the nation “As a result of private research, more than 60 genetically diverse stem cell lines already exist. They were created from embryos that have already been destroyed, and they have the ability to regenerate themselves indefinitely, creating ongoing opportunities for research. I have concluded that we should allow federal funds to be used for research on these existing stem cell lines, where the life and death decision has already been made.”

With the ability of infinite regeneration of these stem cells there is no need to destroy more human embryos.

The mainstream media, however, has yet to report these facts during the presidential election where the Democrat nominee John Kerry and his running mate John Edwards have told the public that President Bush has “banned” stem cell research outright. For more information you can visit the health and human services website through www.whitehouse.gov