By Tom Duggan on September 30, 2014Comments Off on Merrimack Street Business Owners Give Mayor an Earful Over Proposed Changes to Street, Parking 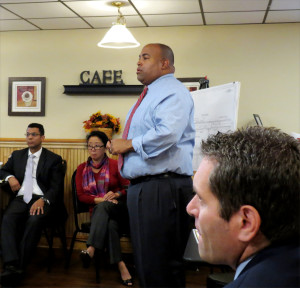 Business owners and residents on Merrimack Street in Lawrence across from Sal’s Riverwalk gave Lawrence Mayor Dan Rivera and state officials an earful today as the Mayor proposed changes to the street.

The meeting was called by State Representative Diana DiZoglio who was approached by business owner Eli Haddad of Eli’s Breakfast Cafe.

The business owners said they had been told by the Lawrence planning board and some heard from the North Andover Town hall that the mayor was going to widen the street and decrease parking spaces, adding that because of the increased traffic at Riverwalk and Monarch, patrons of those establishments are parking in spots in front of their buildings.

“We are already losing parking for our customers because people park in front of our building and then go across the  street,” one woman complained. 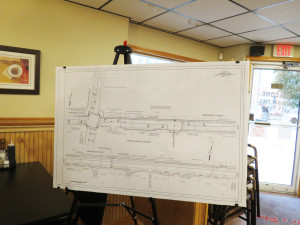 Others said they were concerned that the mayor’s proposal will put them out of business and said that the neighbors should have been consulted.

But Mayor Rivera said that the proposed changes will only take place if the city is awarded a MassWorks $4M grant that will include a bike path, widening the street, reducing the sidewalks and adding a lane among other things.

“I am here to tell you that I hear your concerns, we get it, loud and clear and we are not going to decrease any parking on Merrimack Street. I know you heard that you are going to lost parking and I am telling you it’s simply not true. I will make sure that does not happen. We are not going to let that happen. “

“We are applying for this grant and if we get it we will work with the neighbors, we will incorporate your concerns into the project but you have to understand this needs to be done, the way it is now is causing too many problems and I don’t want to see a kid get killed on this street because of the way things are right now,” the mayor continued.

“This right now is only a proposal, it will change but before there is a final plan we will come back and show it to you, hold a meeting and take all your concerns into account. But what I am hearing today is not that you lost parking spaces but that people from Riverwalk are using them. That’s a different problem than losing spaces. But I get it, give us a little time to come up with a solution and I will come back to you in two weeks.”

“I just want to say one thing,” Finegold told the group of about a dozen business and residential owners. “A few years ago we would kill to have a problem like this. There are great things happening her, jobs are being created and with that comes traffic and parking problems. We will do everything we can to address those concerns but this is a good sign and it’s a good problem to have for everyone.” 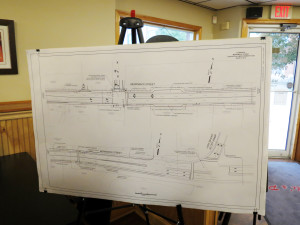 “Our problem is that we feel like we have been completely cut out of the process,” one business owner told the mayor and state officials. “why did we have to hear about this from Dan McCarthy’s office? Why were we not included in this from the beginning?”

Mayor Rivera said that he was miffed with the planning department and apologized for not including the business owners but that he will work with them from this point on.

“That’s on me. We didn’t do it right and I apologize for that. Nobody should have told you that you were losing parking spaces. I should have reached out to you guys and I own that, but we are here now and I am telling you that the rumors you heard are not true. I can also tell you that you will be included in the process from here on out.”

Merrimack Street Business Owners Give Mayor an Earful Over Proposed Changes to Street, Parking added by Tom Duggan on September 30, 2014
View all posts by Tom Duggan →