By Tom Duggan on December 2, 2013Comments Off on Merrimack Valley Comes Together for Menorah Lighting

More than eighty people attended the annual Menorah Lighting on the North Andover Common Monday night as Rabbi Asher Bronstein of Chabat Merrimack Valley praised G-d that we live in a country that still respects religious freedom, “even in the public square”.

Jews and others from across the Merrimack Valley sang on the common as Orit Goldstein, State Senator Kathleen O’Connor Ives, Barry Finegold, Barry Pratt, Rabbi Borenstein and Valley Patriot publisher Tom Duggan lit the six candles for the sixth night of Hannukah.

“We are so thankful to him for tonight’s attendance,” Rabbi Borenstein said, “we also need to thank all of the people who helped to make this Menorah lighting happen,”. Rabbi Borenstein’s father in-law Rabbi Bronstein who organized the event for year, was also in attendance and helped to set up the indoor activities.

An inside gathering took place at the Museum of Printing across from the common where a DJ played music for more than a dozen children. 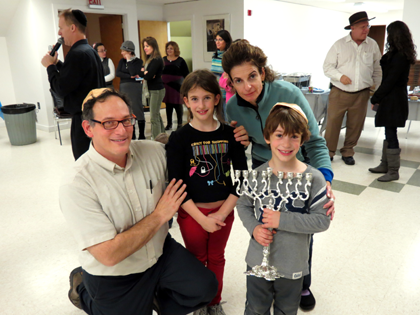