By Tom Duggan on October 28, 2019Comments Off on Methuen Central District Candidates – 2 to Be Elected

The race for Central District City Council is the campaign to watch on November 5th. Methuen residents will elect TWO city councilors in the Central District. Incumbent James McCarty topped the ticket in the primary as he seeks his second term, while fellow incumbent and longtime elected official Joyce Campagnone came in fourth.

But, a quick look at the actual votes show that where each candidate placed on primary day will be completely irrelevant in the November 5th election.
While conventional wisdom says that McCarty will top the ticket again as the young, new renegade on the council, the real fight will be for the second slot. 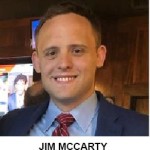 McCarty is a law student and has made a name for himself attacking the police department and showing hostility towards the Jajuga administration. He is a very effective attack dog for his partner on the council, East District Councilor Steve Saba and has called out Jajuga for his misrepresentations to the council on a regular basis.

McCarty voted to cut $1.8M out of the police budget even after being told that it could result in 30 patrolmen being laid off. Eventually, after much delay, McCarty voted with the rest of the council to put the $1.8M back in the budget, but not before a heroic attempt to reorganize the department criticizing Mayor Jajuga whose son is one of the police captains slated to get a reported $435K salary. He also called for the elimination of two captains one of which would be Jajuga’s son.

He supports mayoral candidate Jen Kannan and sees former mayor Sharon Pollard as a boogey man who pulls strings behind the scenes. McCarty has been seen opposing all things connected to Pollard including historic preservation.

McCarty made a stunning accusation during the Methuen Cable Access debate, saying that the police contract was the result of a “criminal conspiracy”.

“Our process was manipulated,” McCarty said on MCTV. “Every hurdle that was put in place was compromised. When you have five votes that are conflicted, all being rewarded on the council, you can get a $434,000 contract, and you can have the city auditor not include a financial impact statement, when his going away present is boosted, and you have to look at who rewarded them.”

“Why did this happen?”

“Who was rewarded the most out of all of this?”

“When you have your Police Chief who, in the calendar year 2018 was paid $343,000 and you have city captains still fighting for $434,000 through arbitration, something went wrong here. I know what went wrong. I believe there was a criminal conspiracy. There was malfeasance. There was defrauding the taxpayers. And to prevent this from happening again we need the Inspector General to come in and start getting people accountable and start holding people accountable so this doesn’t happen again.”

McCarty said he would not support privatizing the technology department but would like to privatize police construction details with civilian flag men.
[Editor’s note: the police chief’s pay is high because he won a lawsuit against the city for wrongful termination. His actual salary is not that high. After winning his suit, the city could not afford to pay him a lump sum, so the city is giving him lawsuit payments built into his regular paycheck to compensate him over an agreed time frame for the millions he won.] 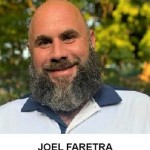 Much has been made of Faretra being part of the Saba, Kannan slate of candidates recruited out of the MAIC sports group for the purpose of supporting his boss and friend Bill Bryant. But, Faretra says he is on nobody’s “team” and will act “completely independent” if elected to the council.

During the two debates held before the primary, Faretra seemed to differ with Bryant and the Saba clan on issues. He insists that while he is friends with Saba and Bryant he is looking to work with everyone and simply wants to help the city move forward. He says being friends with someone doesn’t mean he agrees with them on issues facing the city and hopes people will consider him for what he can do for the city not who he is rumored to be connected to.

Faretra does have one conflict with his wife being a teacher in the Methuen School Department, none-the-less, Faretra showed objectivity when he called out the school committee for not firing former superintendent Judy Scannell, as well as the school’s illegal overspending to the tune of $4M.

Faretra is highly active in school sports and has children in the Methuen Schools.

He took incumbent City Councilor Joyce Campagnone to task for funding the police contract after the council cut $1.8M from the police budget.

Faretra also opposes the way the new charter changes will appear on the ballot in two years, saying he prefers that each charter change provision should be voted on individually by voters instead of lumping all the provisions into one vote where people have to vote yes or no on all the charter changes at once. 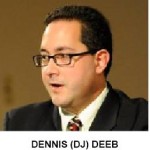 Deeb was a member of the Dracut School Committee and the Greater Lowell Technical School before moving to Methuen and winning a seat on the School Committee. Deeb touts himself as an “ultra-fiscal conservative” and raised the ire of a local union when he said he opposed raising the minimum wage.

Deeb was also taken to task by incumbent City Councilor Joyce Campagnone for criticizing (then) superintendent Judy Scannell’s overspending by $4M then voting not to fire Scannell when it was learned she was not certified or licensed to be a superintendent after serving nearly a decade in that position
Deeb has several master’s degrees and says he knows how to read contracts, something he says the council desperately needs.

He is hostile towards the police department and has attacked Chief Joe Solomon’s spending on police vehicles as well as the controversial superior officer’s contract. Critics of Deeb say that because he spent his time focusing on the police budget instead of the school budget while he allowed Judy Scannell to overspend $4M, and he wasn’t doing his job. Deeb says that he had no idea Scannell was overspending and that he and the committee were lied to. 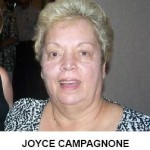 Campagnone has served on the school committee and the city council prior to getting elected to represent the Central District on the council two years ago. Campagnone has been one of the biggest advocates for local veterans, raising money and volunteering for the VFW, the American Legion, and other veterans groups for more than three decades.

Campagnone was not on the city council when the controversial police superior officer’s contract was passed in 2017, though she has often taken the blame for that vote.

Campagnone called the school committee task for mismanaging their budget to the tune of $4M and says she doesn’t believe all of the $4M was spent on special education as Superintendent Scannell and School Committeeman Nick DiZoglio have publicly claimed. “They didn’t do their jobs, that’s all. They had a job, one job, run the school budget and they didn’t do a very good job of it.” she said.

Campagnone says that the school should provide a detailed budget to the council, showing line-by-line where the money is being spent.

“We did it on the council why can’t they do it? We have to have transparency here; this is the people’s money.”

Campagnone voted to cut the $1.8M from the police budget last year, which would have resulted in 30 patrolmen being laid off. Before that could happen, however, Campagnone and her colleagues on the council voted to put the money back, effectively funding the current Memorandum of Understanding (MOU) negotiated by Mayor Jajuga, whose son is one of the police captains who benefitted greatly from superior officer’s contract.

“The problem is that not all of the facts were on the table, we still don’t know all the facts, and that’s what most people don’t understand. Every time we ask for real numbers we get something different from the last time we asked.”
Campagnone attacked Mayor Jajuga during the Paying Attention Debate saying that Jajuga wanted everything his own way and that there was no reasonable way to negotiate when you have a mayor who isn’t willing to work with anyone.

“He was like, ‘I’m the boss and that’s the way it’s going to be.”
Campagnone says Methuen needs a new mayor who is willing to work with everyone and put their petty personal differences aside.

The final election is November 5th. Voters in Methuen will choose two councilors from each of the three districts in the city, three city councilors at-large (city wide) and a new mayor. All political terms in Methuen are two-year terms.

Watch the Paying Attention! debate with the Central District City Council Candidates on the Valley Patriot Facebook Page, & YouTube. You can also download the audio podcast on PodBean, iHeartRadio, and iTunes. ◊