By Tom Duggan on March 24, 2020Comments Off on Methuen Police Arrest Home Invasion Suspect with Firearm 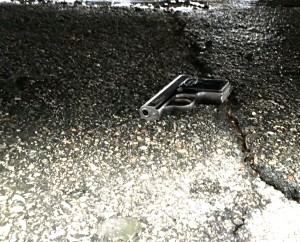 Methuen Police were called to the area of Haverhill St. and Burnham Road late Tuesday afternoon after a man called 911 claiming that someone was trying to get into his home with a gun.

When police arrived they did not find the suspect or victim, and said they believed the call was a hoax but out of an abundance of caution searched the neighborhood with long guns drawn.

Eventually police found the suspect had chased the victim through the neighborhood.

Police arrested the suspect, 39 year old Amaury Amonte of Lynn who was in possession of a handgun. Police were also able to located the victim.

Amaury Almonte was charged with assault with a dangerous weapon, carrying a firearm without a licence, possession of ammunition without and FID card. Almonte was also wanted by Haverhill police for carrying a firearm without a license, ammunition with an FID card, receiving stolen property over $1,200 and possession of a class B substance.

The suspect is being booked at the Methuen Police Station at this time.