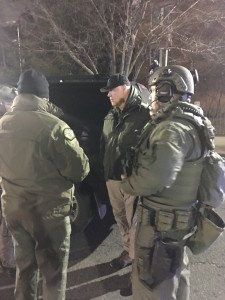 The Methuen Police Department reports that with the assistance of a regional SWAT team, they arrested two men and recovered an illegal firearm and Fentanyl after a fight and disturbance broke out at an apartment building late Thursday evening.

As a result of diligent work by Methuen Police officers and their mutual aid partners, GERMAN JOEL RIVERA, AGE 34 and JORGE LUIS VELEZ, AGE 39 both of Methuen were arrested.

On Thursday at 11:44 p.m., police were called to 91 Broadway for a report of a fight in progress.

A second radio call indicated that a firearm may be present. Officers have been called to this address numerous times for fights, drug activity, overdoses and other disturbances.

Over the course of the on-scene investigation, officers determined that RIVERA was in possession of a firearm. He allegedly reached for an item in his pants, and officers ordered him the ground with their service weapons drawn. 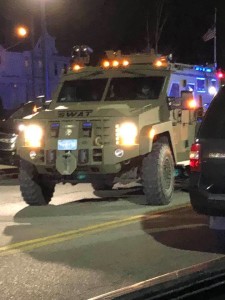 RIVERA resisted and multiple officers worked to restrain him, with one officer securing what was later determined to be a .45 caliber handgun in the suspect’s pant leg. VELEZ was determined not to have been involved in the fight, but a check on his identity uncovered a warrant for his arrest.

RIVERA was charged with: Carrying a Firearm Without a License c269 s.10(a) Possession of Ammunition without FID card c269 s10(h)(1) Assault w/ Dangerous Weapon c265 s15B(b) Possession of a Class A Substance c94C s34 Possession of a Firearm with Two Prior Violent/Drug Offenses c269 s10G(b) VELEZ was held on an outstanding warrant out of Lawrence District Court for:

Failure to Stop for Police, Speeding, Shoplifting by Concealment,

Members of the Northeastern Massachusetts Law Enforcement Council SWAT team responded to assist, and the SWAT team helped conduct a search of RIVERA’S residence after the Methuen Police Department secured a warrant.

Ammunition and Fentanyl were seized in the course of the search.

The SWAT team cleared the area at approximately 2 a.m. Friday.

Chief Solomon praised the hard work and restraint of officers. “There are few more difficult and stressful situations for police officers than encountering a suspect with a firearm,” Chief Solomon said.

“This is an example of true professionalism and restraint in the face of a dangerous and potentially deadly situation. These officers should be very proud of the result, which resulted in the arrest of two suspects and the removal of an illegal firearm from our community without anyone being injured.”