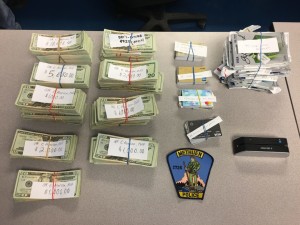 Tharushan Nimalachandran , 30, OF Quebec, Canada and Ajitharan Raveendran, 28, of Ontario, Canada were each charged with Possession of a Burglarious Instrument and Receiving Stolen Property Over $1,200.

Hudson, New Hampshire police had been actively investigating a case involving larcenies from ATM machines by an organized group of criminals when they received information that the suspects were likely operating out of a room in the Days Inn on Pelham Street in Methuen. Methuen Police applied for and received a search warrant for the hotel room and executed the search warrant on Saturday, April 27 at 6:53 a.m.

Methuen police found two men in the room, one of whom presented Canadian identification. The other man had no identification. Methuen Police contacted the Department of Homeland Security seeking assistance with identifying the two subjects, who were identified as Nimalachandran and Raveedran.

After applying for and receiving an additional search warrant for a rental car in the possession of Nimalachandran, police uncovered during their search of the vehicle large amounts of cash inside duffel bags as well as gift cards, debit cards, a printing device and an electronic device determined to be used to activate and utilize bank cards.

Both men are being held at $250,000 bail, each, Saturday pending a court appearance on Monday.

“This is a great example of a successful collaboration between two departments, in two states,” Chief Solomon said.

“Great work to the Hudson, New Hampshire Police Department, and to the Methuen Officers who swiftly and effectively executed this search warrant and investigated today.”