By Tom Duggan on May 6, 2017Comments Off on Methuen Police Participate in Click It or Ticket Campaign 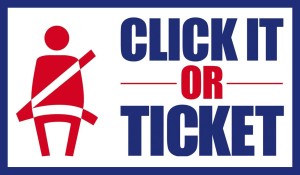 METHUEN — Mayor Stephen Zanni and Police Chief Joseph Solomon are pleased to announce that the Methuen Police Department will take part in the national Click It or Ticket campaign next week to promote seat belt use through increased traffic enforcement.

The initiative is organized through the Massachusetts Highway Safety Division of the Executive Office of Public Safety and Security and will run from May 8-29.

“Seat belts save lives and too many people are not wearing them,” Mayor Zanni said. “We hope that our participation in this campaign will encourage more people to buckle up every time they get into a vehicle.”

According to the state’s annual seat belt observation study, Massachusetts seat belt usage is significantly lower than the national average – 78 percent compared to 90 percent. Additionally, the National Highway Traffic Safety Administration reports that out of the 172 people killed in motor vehicle crashes in the Commonwealth in 2015, 64 percent were not wearing seat belts.

“More people buckling up means more lives saved,” Chief Solomon said. “Our officers will be out enforcing the seat belt and child passenger safety laws so that fewer people are needlessly injured or killed in crashes in Methuen.”

Methuen is one of approximately 200 local police departments in Massachusetts, along with the Massachusetts State Police, to participate in the high-visibility mobilization.

Anyone who has questions or concerns about the campaign, or who would like to schedule an appointment to have a child seat installed, should contact the Methuen Police Department at 978-983-8698.