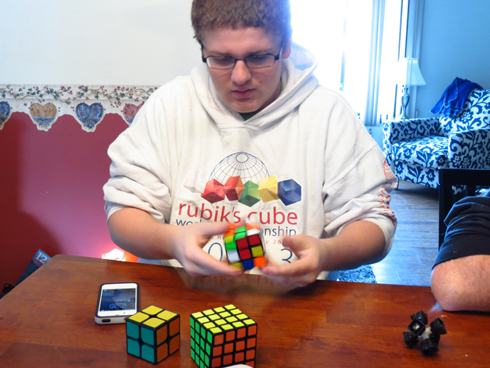 Methuen teenager Josh Flagg entered his first Rubik’s Cube contest in April of 2011 at Massachusetts Institute of Technology. His second competition was at Harvard where he competed in a four by four Rubik’s Cube. In total, Josh has competed in 26 Rubik’s Cube tournaments across the country including the “worlds” competition at the Riviera in Las Vegas last summer, placing 42nd out 650 competitors from across the globe.

Of the 650 competitors, Josh was one of only sixteen Americans to compete. Thirty-seven countries were represented at the “Worlds” competition.

The biggest competition prior to that was about 210 people,” Josh said. “in the second round at ‘worlds’ there were about 250 people. It was enormous!”

Josh placed 42nd in the first round, 47th in the second round and 55th in the third round and placed 45th overall.

In the competition. each person gets the same scrambled pattern to solve in order to make it fair.

Josh said that he watched a tutorial¬ online once about how to solve the cube and was fascinated with solving it.

Once he mastered the normal three by three Rubik’s Cube, he started to practice on four-by-four cubes and then graduated to twelve-by-twelve cubes and even bigger puzzles of various shapes.

“He has practiced so much I’d say he has done at least a million solves since he started,” Josh’s father Scott said beaming with pride. “He’s a smart kid and he has this ability to look at things and solve them in his head.”

“He will just sit there and do a hundred solves because it only takes him about ten second a piece,” his mother Judy added.

“He can have an entire conversation while he is doing it and that’s with any cube.

Josh’s best time is 8.4 seconds in competition. “At home it’s like 6.8 seconds, and will be in Norwalk, Connecticut on February 1st for the Northeast Regional competition, and then the nationals in August to compete for the world championship in 2015.

“You get five solves and they throw out your best and your worst and then average the rest out,” Josh says.

Josh is ranked sixth in the state solving the Rubik’s Cube. “I’m always trying to get better, trying new strategies, it’s not just about practicing, it’s about figuring ways to get it done better and faster and using different strategies,” Josh said.

The competitions are run by the World Cube Association. The top three winners get a cash prize.

Josh is a junior at Essex Agricultural School and says he wants to major in biology when he goes to college.

The Valley Patriot will report on Josh’s progress in the upcoming competitions.