By Tom Duggan on February 3, 2007Comments Off on Methuen’s Police Chief Joe Solomon Speaks Out

Defends Grant Spending, Says Eagle~Tribune Attacks on Him
and Dept. Motivated by “Racism Against Arab-Americans”

Methuen Police Chief Joe Solomon said in an exclusive interview with The Valley Patriot this week that federal grant money from the Department of Justice for thecity’s Weed & Seed program was spent legally and in compliance with federal regulations.

Solomon was reacting to an Eagle~Tribune report which outlines how the chief and the Methuen Police Department spent money on travel expenses at conferences around the country which was paid for out of the Weed and Seed federal grant program. Methuen received the Weed and Seed five year grant from the Department of Justice in the amount of over $1 million dollars. The Tribune focused on the spending of a mere $27,000 in travel expenses, something the chief took exception to.

In his discussion with The Valley Patriot Chief Solomon said he wanted to correct the record about the travel expenses and discuss the appropriation of over $1 million from Weed and Seed to transform the Arlington neighborhood from a crime infested area to a place where families feel safe and where children in that neighborhood are thriving in school thanks to the “Safe Haven” facility Solomon established.

“The Eagle~Tribune ran a front page story to make it look like there was misspending with the Weed & Seed money we get from the Department of Justice. Any conferences we went on for Weed & Seed may not have been mandatory, but it is highly effective to go and network with other law enforcers because you get to collaborate with people from other states. The people who live in our neighborhoods in Methuen are having the same problems as other cities around the country. What’s plaguing us here in New England is also plaguing people in Texas and California and Arizona. You can learn a lot from some of the things they did or some of the mistakes they made. Networking is very important.”

Solomon said he contacted The Valley Patriot because the Eagle~Tribune was “painting a picture of inappropriate spending of federal dollars, inferring that an abuse of taxpayers’ money was taking place,” something that Solomon said was blatantly false.”

“If they want to say we did something illegal, they should come up with some evidence,” Solomon said. “There is nothing wrong with going to conferences that are highly recommended by the Department of Justice.” 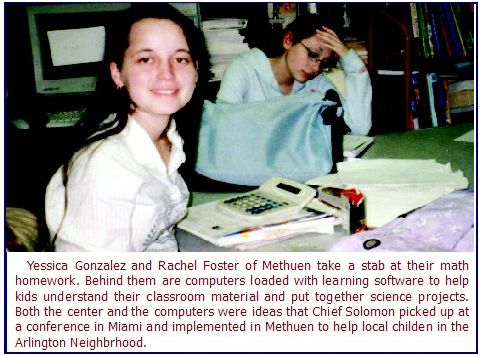 Asked if the grant money for Weed & Seed has been misspent in any way, Solomon bristled and defended the program, saying that “all the bad publicity created by the Eagle~Tribune” was “casting a bad light on an exceptional program.”

He continued, “The majority of Weed & Seed money is going directly into the neighborhood. It went to fund the Safe Haven program. The Safe Haven is located at One Broadway just across the Lawrence line in Methuen. It is a facility run by Linda Soucy and it is an after school facility equipped with computers to help the children do their homework after school.”

“Through the Weed & Seed grant we were able to open the Safe Haven program at One Broadway at the old water pumping station where we established a safe place for neighborhood kids. We got the idea from Miami where we learned that when they established little centers to keep kids off the streets – instead of hanging out with gang bangers – they actually saw results in the neighborhoods.”

“The people we talked to in Miami established a computer learning lab. We copied that idea here and it has been very successful for the kids. This is so valuable. The way we originally found out how valuable it was to have a homework center and computer labs was from networking with other municipalities at these conferences. But, of course, they are all painted as junkets.”

Chief Solomon says that each day the center serves between 70-100 children.

Solomon also pointed to the dramatic drop in crime in the Arlington neighborhood. 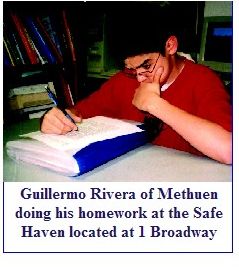 “The success cannot be overlooked in Methuen’s Weed & Seed program. Anyone can find some small expense in any government program and nit pick as to whether it was appropriate, but I know this: you don’t find prostitutes and drugs and gang members in the Arlington neighborhood now. Fifteen years ago you had to send a two-man cruiser and a one-man cruiser for every call. You had to send three cruisers to protect the fire trucks and ambulances when they were responding to emergency calls. Today you can go there at night and not be in fear of being attacked. I think the quality of life has increased a thousand percent for the people who live there. Not only did we try to attack criminal problems in that area, but we tackled the social aspect of having citizens work with police to change the environment of a criminal neighborhood.”

“We’ve been able to provide overtime for cops to be on specific patrols. We started with citizen patrols. We initiated a summer walking program with two cops, two cadets and two residents. We literally walked the entire neighborhood in a group with the neighbors. It made them feel good that we had a relationship with the neighborhood people. We got that idea at a conference, too,” the chief added. “Once you give people an opportunity to help you make their neighborhood better, they become your eyes and ears. They trust the police more and are more willing to help us in criminal investigations. I can tell you I am a totally different police officer today because of Weed & Seed than I was ten years ago. I think it has changed the whole nature of policing.” Chief Solomon said he took exception to what he said was an unfair attack on him and the police department by the Eagle~Tribune.

“They not only made it look as though we were doing something wrong, but they didn’t even have their facts right,” the chief charged. “For one thing,” he added, “they made it look as if we each received $300 per day in meal expenses. There is no way we spent $300 per day each; we spent about $50 per day each. There were not six people on the trips; there were four. And as for cab rides, it was a lot less expensive than renting a car. I think we were very frugal in the way we spent that money, we even took subways for the majority of the time we were in L.A. and people kept telling us we were crazy. We submitted all the receipts from that trip, but, of course, the Tribune doesn’t want to print that.”

“You have to remember,” he added, “in major cities Like L.A., D.C. or New York, a hamburger and french fries in a restaurant cost, like, ten bucks. It isn’t like the prices around here. There were no lavish expenses on these trips, believe me.”

Asked why the Eagle~Tribune would purposely lead their readers to think he and others in the department misappropriated federal dollars, Chief Solomon said he believed the attacks were “political” and driven by an agenda at the newspaper because of his “ethnic background.”

“I personally feel this is a racial attack being launched against me by the Eagle~Tribune. Every time they run a picture of me they use an old picture with a moustache and goatee because I am an Arab American. I have received so much pressure on this goatee thing I finally shaved it off. They have been after me since 911 personally because I am an Arab American police chief and I’m not going to be silent on this any longer.”

Solomon further postulated that, “Tomorrow we could solve every single crime in the city of Methuen and they (the Eagle~Tribune) would still write a negative story. That’s how they are once they’ve decided for whatever reason that they don’t like you, you can do no right by them no matter what.”

Solomon says that his primary concern now that the neighborhood programs he has set up as the result of federal grant money will be able to continue when the grants expire in a few months. “We think there is a real possibility that these programs may cease to exist and I am not really confident that we are going to be able to fund them. But we are hoping someone will step forward and help us, either a private company or non-profit organization that really cares about the progress we have made with kids in the Arlington area.”

Asked about the prospect that any of the Weed & Seed money may have been spent inappropriately, Solomon emphatically denied the charge. “We didn’t steal any money as the Trib likes to elude to. I am not aware that anything has been done wrong at all and I have personally looked at all the grant documents. We have done an exceptional job at record keeping. We are always checking and double checking issues like this to make sure we are 100% in compliance with the federal requirements. It is very surprising to see the kind of political attacks coming out of all this. We strive to do our best to service the people of Methuen.”

“Like with anything else,” he concluded, “When you go out and do the right thing and institute changes, you are going to make enemies. You are going to be get attacked. I understand that. But the truth is we did absolutely nothing wrong and the public deserves to know the truth.”

Asked what happens now, a humble Solomon said, “I’m just going to go out there, keep doing my job, and keep trying to make a positive difference in the neighborhoods of Methuen.”