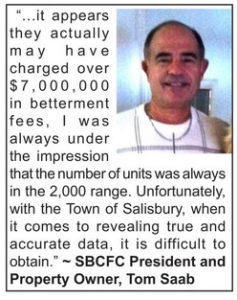 SALISBURY, MA – For the last year and a half The Valley Patriot has been investigating the way the Town of Salisbury charges rate payers for construction projects – sewer betterments, sewer user fees, water fees, taxes on property, and exactly how much tax and at what rate payers were supposed to pay.

In October of 2013, we published a story about Gracemarie and Joyce Tomaselli who had been suing the town for almost two decades over what they called a fake betterment. They say that not only did the town charge the rate payers a $7.8M betterment for a new sewer treatment plant and the sewer system, but that the MA Department of Environmental Protection, the US Department of Agriculture and the US EPA paid the town 100% of the project.

The Tomasellis have lost their cases but have filed an appeal, as well as a federal court case that is still working it’s way through the court system.

PROPERTY OWNERS ASSOCIATION PRESIDENT: WE WERE CHARGED TOO MUCH

Tom Saab, President of the Salisbury Beach Citizens for Change (SBCFC) and property owner on North End Blvd. says he was told that the government grants would not cover the entire sewer project costs. He says he was told that the beach owners would be charged a betterment of $2,500 per unit and would be placed on the tax bills as a lien at 8% interest. Saab says he disputed and debated the issue with the town, but to no avail.

In September 2013, Manager Neil Harrington attacked Saab and SBCFC for sharing an email about the Tomaselli’s claims against the town. Harrington renounced Saab and SBCFC during the televised Selectmen Meeting that Salisbury residents disassociate themselves with the SBCFC.

Documents from one of the Tomaselli’s lawsuits show an email from Saab saying that rate payers in Salisbury were not charged correctly for the sewer betterment also complaining that Salisbury officials are not transparent with town documents and public information.

The Tomasellis have long complained that the Town of Salisbury voted for an $18M sewer project in 1982, but did not record the vote with the Registry of Deeds to create a lien. Anyone who owned property in the project area in 1982 (when the town voted in the sewer project) would have to pay the betterment fees. Anyone who bought property after that date would legally not be responsible for any cost for this sewer project. Yet, Salisbury residents in the project area who purchased their property between 1982 and the present were charged for the betterment.

Salisbury resident Brendan Lundy says that when he complained to the Town of Salisbury about the sewer betterment, he was told “This is how it is done here.”

Lundy bought his house in 2009 on Brissette Avenue. He says that the title search at the Registry of Deeds had no liens when he bought the property. Lundy said he had no idea of the “hidden costs”.

He also says he did not know about any grants the town received at the time. Lundy says he was told he had to pay the betterment and he paid it in full rather than fight the town.

He said his house was bank owned but if the lien would have been recorded, his mortgage company would have made sure the lien was paid before they would let him buy the property.

“How did they get away with this for 20 years?”

Lundy’s street was not reconstructed for the new sewer system and has had the original sewer since approximately the 1940s. He says he found out about the betterment charge in his second tax bill he estimates was around March of 2010.

Nicole Stevens of Railroad Avenue says the sewer was not reconstructed on her street and also has the original sewer from the 1940s. Nicole Stevens says she paid the betterment even though she bought the house in 1996. Like Lundy, Tomaselli and so many others, Stevens says she did not know about the betterment charge prior to the closing on her property because there was no lien at the Registry of Deeds.

Stevens says that when she went to the closing she was told for the first time about a betterment, and that she had to pay it annually on her tax bill until it was paid up or she could not buy the house.

“I’m very upset but I agreed to this new condition because I had so much time invested and by that time, I just wanted the house.”
Stevens says she is so angry she is trying to get a group of Salisbury rate and tax payers to band together to see this through and investigate what can be done about the illegal fees the town has and is charging it’s residents.

The US Environmental Protection Agency has produced a letter validating the claims of the Tomasellis that May 17, 1982 was the date of the vote for the sewer project that the state and federal government paid for. The letter was dated November 12, 2014.
The letter states: Based on the documentation in our files, the Town voted to approve the construction of the wastewater treatment plant and sewer interceptor project at the annual Town meeting on May 17, 1982 (Article #28).”

“The town has been using March 16, 1992 date as the sewer assessment order causing us to lose in court. They lied. But the EPA clearly says it was the 1982 date,” Joyce Tomaselli said.

“What we need is for people to come forward so we can start talking about a ten taxpayer lawsuit or a class action lawsuit against the town,” said Gracemarie Tomaselli.

“You know, the town officials can say whatever they want to cover this up but the whole town can’t be wrong. It’s not just us. What we need is people to come forward. There is strength in numbers.”